[notice]Ellisras project manager Kevin Stephens attended the second, annual, Limpopo MMC (also known as the Mighty Men Bushveld) last weekend. This is his testimony of what he and other men experienced 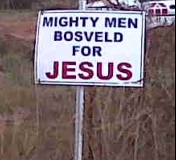 at this inspiring event that continues the tradition started by Angus Buchan on his Greytown farm in 2004.  After the 2010 MMC which was attended by some 350 000 men, Buchan asked his “sprititual sons” to carry on the legacy by hosting regional MMCs in  different parts of the country. [/notice]
The Bushveld MMC took place from Friday March 9 to March 11 on the Snymansdrift farm of Francois Brits, near Polokwane. The theme for this year was “Seeking the face of God”.

Cars started to trickle in from the Thursday night. But the main rush took place on Friday as thousands of men descended on the farm in time to set up camp and be ready for the first session at 18h00.

The Friday evening began with a “lekker opskop” praise and worship session led by the legendary frontman Frana Benade and the music team. Brits gave the men a warm welcome to his farm and assured them that they were at the best place for that time. This set a solid tone for the weekend as it helped the men to unwind and receive what God had in store. And clearly God had a lot in store as Oom Piet Jacobs began to minister the Word. This was to lay the foundation for the weekend. He used a simple picture of an apple that was cored out in the middle to illustrate human nature. We try to fill the core with all sorts of things, but only Christ can fill the void within, no matter how we try and fill it with all sorts of temporary stuff. The simplicity of this word opened men’s hearts to receive God as witnessed by the overwhelming response to the message. As Francois jokingly put it:  “Oom Piet het die manne raak gery”.

Saturday started with a great buzz in the camp as everyone awaited the arrival of Mighty Man Father Oom Angus Buchan. The praise and worship kicked off where it left off on Friday with Frana saying:  “We were only burning on two pistons; so let’s see if we can kick-start the other two  pistons as well”. Indeed, when all four pistons kicked in, we were soaring in the spirit like the eagles that were gathering above us. Leading from the front Frana sang his own song “Yes Lord, I will ride with you”, sparking a release of the Spirit among the 4 000-strong crowd of men.

Oom Angus arrived to a roaring applause and greeted the men with his well known “Amen!!” He began by introducing his spiritual son Joe Niemand who performed the Mighty Men song “Ek sal nie bang wees nie” — a song based on Psalm 91.

Oom Angus, as is his style, brought a simple word. In keeping with the theme of the weekend, he emphasised two words: 1. Pursue 2. Persist. He used the illustration from Matthew 9:27 of two blind men who pursued Jesus, even gate-crashing as they followed him into a house. Through their persistence they received their miracle, setting a standard of pursuit and persistence for us to follow. After sharing more encouraging “pursuit” scriptures he urged men to take up their rightful places in their families and communities and to become the God fearing role models for the next generation of men. The word was well received as more than 500 men made a first time commitment to receive and follow Christ as their Saviour. Men’s lives were being changed, fathers and sons were reuniting, and brother and brother were reaching out to one another. God’s Spirit truly settled over Snymansdrift as young and old saw God revealing Himself.  Oom Angus also prayed for rain over Limpopo to help the farmers as they enter the dry winter season.

During the Saturday morning session there was a great vibe in the camp as men phoned home to relate the good news of what God was busy doing:  broken relationships were mended, and forgiveness and healing took place. A sense of unity among the men started to appear as we all realised our total need for God the Father.

Riekert went big indeed, bringing a pure, Spirit-inspired word. He shared simple, light-hearted, everyday stories from his experiences as a son, father, husband and “dominee”. Drawing on 1 Peter 1:22 -23, (“Having purified your souls by your obedience to the truth for a sincere brotherly love, love one another earnestly from a pure heart, since you have been born again, not of perishable seed but of imperishable, through the living and abiding word of God”) he showed how we apply love selectively, and to our advantage. For instance, how much do we love the taxi driver who pulls up in front of us, or why do we only love certain people in our churches? He said our purification should always lead us to sincere love, no matter what the situation. Our purification should eliminate all wrong perceptions and ideas of others according to 1 John 4:7 (“Beloved let us love one another, as love is from God, and whoever loves has been born of God and knows God”.)Our purification should lead us to true repentance causing us to love earnestly. Riekert’s word hit home as everyone answered the call to repentance from unloving perceptions and selective love. And all prayed to be filled with an earnest love for one another.

On Sunday morning a deep sense of what had taken place over the weekend came to the fore as tents were taken down and everything was packed away for the long haul home. Groups of men huddled together to pray before the morning service. As the families arrived there was an atmosphere of renewal, as wives received new husbands and children received new dads — men with a clear vision of where they were heading. Praises be to God from whom all good things flow!!

Now, if the men were firing on four pistons on Saturday, by Sunday morning they were firing on eight. Under a warm, cloudy, sky heaven was felt on that patch of land as our praises rose as a fragrant offering, acceptable to God. Goose bump stuff! With the final formalities concluded, Isak Burger stepped up to place the final cherry on the cake. He commended Angus Buchan for his obedience to the Spirit in planting the seed of Mighty Men and thereby creating a move of God in South Africa that continued to grow every year as men’s lives were touched and changed forever.

One of the illustrations he used to emphasise the point was a circus tent which was held up by a big central mast, while its flaps were held up by smaller outer poles. Christ should be our central mast but sometimes we allowed other things like our jobs, our children, our wives or even hobbies, to become our central mast instead of the side poles they should be. If Christ was at the centre our life’s tent would remain standing when the side poles folded.

“Is Christ the middle mast of your life’s tent?” Oom Isak asked, concluding an awesome Spirit filled weekend in the Bushveld in which each speaker unknowingly flowed on from the previous one.

Francois Brits who has a vision to host the MMC Bushveld on his farm for seven consecutive years (i.e. another five years) is truly a Mighty Man of God who is surrounded by a remarkable team that has totally served him in their shared vision to trust God our Father for every provision. Despite incurring significant costs in building a big stage for the event which has not been covered by ticket sales, he remains full of faith. My prayers and support for them will be unwavering. Going forward I am left with the words of Paul “for to me to live is Christ…” Peace and grace from our Lord. See you in 2013. Snymansdrift!!