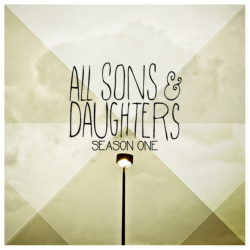 ALL SONS & DAUGHTERS — SEASON ONE

When given the opportunity to listen to and review an album of a group that touched your heart in a profound way first time round, there are only two words to explain this experience:  “pure bliss!”

ALL SONS & DAUGTHERS: Season One.  This album was released by Integrity Music in March of 2012 and this production marked the first studio recording released by the dynamic duo of Leslie Jordan and David Leonard.  This group of young worshippers understands the whole vision of growing where you are planted and this encouraged them to bloom inside their local body. Home base for them is Journey Church in Franklin, TN.  Here they started writing songs for their own people, a way to express the way they as a community of believers encountered Jesus.  These songs needed to be relevant to the ‘average Joe’ as they wrote songs ordinary people could relate to and sing where they find themselves, worshipping Jesus in everything they do.

On their home page they have chosen three words to capture the heart of them as a group and what they bring to the worldwide community of worshippers:  “Unpolished, Imperfect and Freedom”.  To quote but a few of the reviews they have received worldwide on this album, Lins Honeyman from Cross Rhythms said:  “Jordan and Leonard are never afraid to be experimental whilst the blending of their vocals adds weight”. Derek Walker from Phantom Tollbooth’s said the album is “free from predictable directions, these tunes drift, morphing slowly into different shapes, like smoke swirls – yet the two voices cling so close together through all the changes that it makes you wonder whether they are really brother and sister. Walker wrote that “but the overall standard of both lyric writing and melodies on Season One is tremendous.”

I could not have said it better myself!  This album consists of 15 songs that will definitely invite and inspire you to join in, bringing your own harmony to add to an excellent production.  The good news is that there is of course the bonus DVD that includes performance videos & song stories for three of the songs.  Enhancements include Chord Charts and digital copies of videos.

Find your way to their website at http://www.allsonsanddaughters.com/home  and enjoy what they have to offer…

Let the worshipper in you arise.