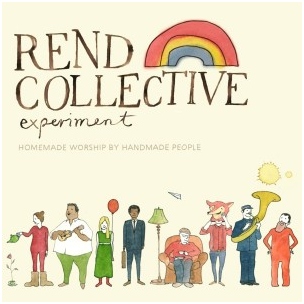 I just took one look at the album cover for this CD and couldn’t wait to hear it. Before you read further, take a look at it… I don’t know about you, but my first thoughts that went through my mind are that this album looks quirky and like a whole bunch of fun! I took out the album cover to have a look inside and it just once more confirmed this was going to be different and something good…But I won’t spoil it for you…go get the CD and you will see what I am referring to. :-)

So with an expectation of something different and refreshing, I put the CD into my car and I fell in love! They fulfilled every expectation I had from their cover. It hasn’t left my CD player since, and I was given this CD to review about three weeks ago…Yes, it’s that good!

The Rend Collective Experiment is a band that originates from Northern Ireland. This is Rend Collective’s second album. Their first ‘Organic Family Hymnal’ was released in September 2010. It was such a great success that they were kept busy with festivals and gigs around the UK. They toured the US too, opening up for Chris Tomlin. They released ‘Homemade Worship By Handmade People’, their second album, in January this year.

Their sound has been compared to bands like ‘Mumford & Sons’ and ‘Arcade Fire’, but I have to say I honestly haven’t heard anything quite like it. They really create a feeling of community and fun with their sound, which is quite a different thing to say about the sound of an album. One gets the feel of a group of friends meeting in someone’s lounge and all contributing in whatever way they can to the songs on the album. And…that’s exactly how this album was recorded and produced. The album was not produced in a studio but in people’s houses all over the world. That being said, don’t be fooled, the quality of the recording is great.

The first track ‘Praise Like A Firework’ really lives out its title. It blazes off to a lively start and doesn’t let up at any point. It is full of energy and one just wants to get up and dance. I love the descriptive words they use in this song, for eg. “My concrete heart won’t stop me”, “I leave behind the cynic in my soul”. It just leaves you feeling thankful and full of praise to God for what He has done for us.

‘You Are My Vision’ is the classic hymn we are all familiar with but Rend has put a whole new spin on it that the whole feel of the song is different. This is definitely one of my favourite songs of the album. What fun they must have had making this song! The use of instruments and skill in this track is phenomenal. The whole song is so upbeat and happy that you won’t be able to stop your feet from tapping and your face from grinning…widely. I’d love to hear this version played in churches.

Next up is ‘Second Chance’ which slows things down a little. Once more, amazing words with amazing imagery. This song just declares what Jesus did for us on the cross and can be easily used in a church worship context. I particularly love the second verse: “When sin and ugliness, collide with redemption’s kiss, beauty awakens by romance. Always inside this mess, I have found forgiveness, Mercy as infinite as You.”

‘True Intimacy’ starts with a glockenspiel playing a tune that the piano then mimics for an introduction that suits the song really well in that it creates a sense of lightness and being care-free. This track also introduces for the first time a female lead vocal who, with the style of music, almost sounds similar to ‘Sixpence None the Richer’.

Track 6, ‘Build Your Kingdom Here’, starts off with strong, passionate guitar strumming and vocals asking God to “Come set Your rule and reign, in our hearts again, increase in us we pray, unveil why we’re made, come set our hearts ablaze with hope, like wild fire in our very souls, Holy Spirit come invade us now”. The drums and the bands quirky beat that they love then join in. This whole song’s words are actually so powerful that I want to quote all of it…But I will show some restraint and just quote the chorus: “Build Your kingdom here, let the darkness flee, show Your mighty hand, heal our streets and land. Set Your church on fire, win this nation back, change the atmosphere, build Your kingdom here…we pray”.

‘Desert Soul’ then follows. This song starts off quite different from any of the other tracks with a lot of banjo picking, which they do a lot of on the album, but the whole atmosphere of this song is a lot deeper, which is conveyed through the hauntingly beautiful stringed instruments in the background. It is about being desperate for God, and without Him; us being dry bones and essentially a desert soul. There is a really beautiful instrumental part in this song too that just conveys the intensity of the desperation they speak of in the lyrics.

‘Christ Has Set Me Free’ is a short track that takes us back to the more positive and thankful lyrics that make up most of the album. This is followed by ‘Keep Me Near’ which, with the use of some amazing vocals, asks God to keep us near His heart.

‘Alabaster’ is a beautiful song based on Matthew 26:6 where the woman breaks her alabaster jar to anoint Jesus’ feet. This song talks about us being that jar and being broken at His feet and kissing His feet; being lost and found in Him alone.

The final track, ‘Shining Star’, comes out trumpets blaring, announcing boldly who Jesus is to us with a chorus that declares: “What a picture of love… You are magnificent, you are my Rescuer…”. It ends off and summarizes the album really well with all the instruments just blaring their praises to who He is. This would be an awesome song to sing in church and is one of my favourite favourites.

As I wrote the summary for each song, I found myself starting to write that it was one of my favourites on the CD…Until I realized I was going to have 11 favourite tracks on an 11 track CD! One of the things I enjoy the most about this CD is that it is so God focused. The lyrics always and unashamedly point to God’s greatness and then our appropriate response of thankfulness and surrender. Honestly, if you like something different, fun, folksy and quirky this CD is truly amazing. There are so many songs that are lyrically rich and strong that this CD’s songs can, and actually should, be used in a church’s worship context – worship leaders you will want to get this CD.

Here is a link that has songs from both of their CD’s so just ensure you are listening to songs from the names of songs I have given above: