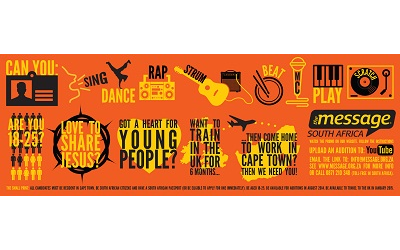 Some news just seems too good to be true, but this is not the case with the Message Trust SA, which has announced that it will be holding auditions in Cape Town for its first international act — a mission band that will be based in Cape Town and undergo training in the UK.

A press release issued this week calls on all musicians who are Cape Town residents and are able to sing, dance, rap, beat , MC, play, strum or scratch. According to the release, the Trust has been at “the forefront of creative mission in the UK through dance, hip-hop and rap music” for the past 20 years. The Message’s UK creative band is called, Twelve24.

The terms and conditions which are mandatory to all candidates state that entrants must be committed Christians, reside in Cape Town (or at least for the duration of the contract), be South African citizens and have a South African passport or be eligible to apply for one immediately, be aged between 18 and 25, be available for auditions in August 2014, be available to travel to the UK in January 2015, be willing to serve full-time with The Message Trust in Cape Town beyond January 2016 and be willing to pay or raise funds for the flight and visa costs to the UK.

The release states that, “This act will be based in Cape Town and work full-time as part of our Message South African team. This is an opportunity for musicians, dancers, rappers and DJs to use their God-given gifts to serve in frontline gospel ministry.”

After the auditions in August, the successful candidates will work as volunteers with the Trust for the remainder of 2014. They will then spend their first year (2015) with The Message as interns, working in schools, prisons and communities. The one-year internship will cover all expenses, excluding flights and visa costs for the UK, and will include a six-month training period at the Message Academy in Manchester, UK, where successful candidates will not only receive training, but will cut their first CD. All recordings produced will be retained as property of the Trust and will be used as part of the ministry of The Message Trust.

According to the Trust, the goal is for the band to continue serving as part of the full-time team of The Message in Cape Town beyond from January 2016. It will hold a formal review by October 2015 to make the final decision concerning the way forward beyond 2015. Contracts will be drawn up with each band member confirming all these details.

Candidates will be required to submit an online video via YouTube, demonstrating their creative talent, together with a two-minute talk on the motivation behind why they feel God has called them to serve Him through their creative gift. The link to the clip(s), along with the application and personal details, must then be emailed to the Message offices.

A shortlist of candidates will be invited to an audition to facilitate a final selection.