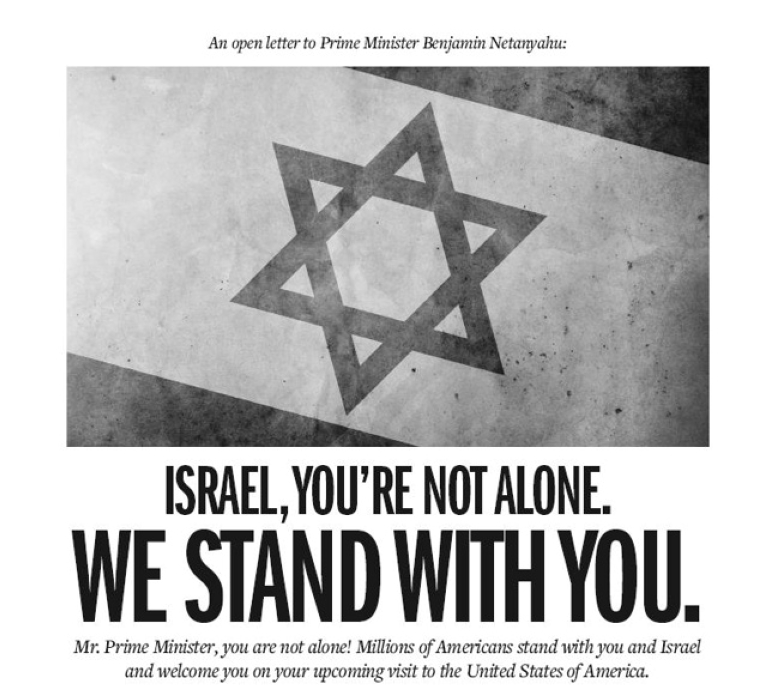 Leaders across America whose organizations represent literally millions of people have told the nation of Israel, much like the wizard told Dorothy in Oz, “don’t listen to that man behind the curtain,” or in the current case, don’t listen to the man in the White House.

The message came just hours after Barack Obama announced to the world Israel needs to return to its pre-1967 borders to appease Palestinians dedicated to the annihilation of the Jewish nation.

Obama made the statement in an address in advance of Israeli Prime Minister Benjamin Netanyahu’s planned visit to the White House today. Netanyahu preceded the visit with a statement rejecting Obama’s call for a Palestinian state based on Israel’s pre-1967 borders, calling the lines “indefensible.”

The message to Israel was in a full-page newspaper ad published today in Jerusalem by a coalition of American organizations coming together under the slogan “Israel, You’re Not Alone.

“WE STAND WITH YOU,” the Jerusalem Post ad states. “Mr. Prime Minister, you are not alone! Millions of Americans stand with you and Israel and we welcome you on your upcoming visit to the United States of America.”

The message of the ad, which appeared one day earlier in the Wall Street Journal, isn’t complicated:

“We, the undersigned, encourage President Obama, the State Department, the Congress, and the whole of the United States of America to stand unwaveringly with Israel, without further sacrificing Israel’s sovereignty, safety, or security.”

It asserts that the United Nations “Peace Plan” actually is “not a plan for peace at all, but would ethnically cleanse 400,000 Jews from their homes and lands. No foreign country or U.N. resolution has the right to decide a nation’s borders.”

“We must stand with Israel at this critical time,” said Mike Gottfriend of Team Focus, one of the originators of the idea. “We are thrilled that more than 50 Christian and Jewish leaders, who represent millions of Americans, have joined the ad and the effort.”

Gottfriend is a former ESPN sports commentator and head coach in Cinncinnati, Kansas and Pittsburgh.

A news conference on the issue is set Monday at 1 p.m. Eastern time at the National Press Club with many of the leaders.

His plan, Gottfried said, would not only divide Jerusalem and the nation of Israel but make America’s strongest ally in the region nearly indefensible.

“Who are we to change Israel’s borders,” asked Janet Porter, president of Faith2Action. “We must stand with Israel like never before.”

On the website is information about the effort, including a video:

Porter told WND the ad is a response to Obama’s “assault” on Israel.

Based on biblical references to the Jewish nation as the “apple of God’s eye,” she said, “I believe that to follow what the president would want puts both countries in peril.”

She said the Palestinians from whom Obama is trying to obtain favor “do not recognize the right [of Israel] to exist. They despise her.”

Even on a secular plane, without references to the biblical prophecies regarding Israel, she said, “No foreign country or U.N. resolution has a right to decide a nation’s borders. In America, if we can tell Israel its borders, what keeps Dearborn from a U.N. resolution announcing ‘Dearbornistan. It’s absurd.”

We stand with your right to secure Israel’s borders without giving away additional land to your openly avowed enemies who do not recognize your right to exist. We recognize that former “land for peace” agreements such as the Gaza withdrawal that ravaged thousands of families from their homes, only served to increase terrorist attacks from even closer range, killing many innocent men, women, and children.

We recognize that the United Nations “peace plan” is NOT a plan for peace at all, but would ethnically cleanse 400,000 Jews from their homes and lands. No foreign country or U.N. resolution has the right to decide a nation’s borders.

We acknowledge Jerusalem as Israel’s God-ordained undivided capital, knowing that Israel’s sovereignty will protect the holy sites of all faiths, rather than allowing them to come under control of Hamas terrorists who hate Jews and Christians alike.

We honor Israel as our greatest and most trusted friend and ally in the region, and are grateful for the vital intelligence and technological advances that have enhanced our own security. We believe Israel’s ancient prophets who warned of dire consequencs to any nation who would divide your land.

Obama’s request was for Israel to contract in size until it is within the borders that existed before the 1967 Six-Day War.

Obama and Netanyahu had a “useful” conversation, Obama reported after the meeting.

“We agreed there is a moment of opportunity that can be seized as a consequence of the Arab spring,” Obama said.

He said it is important for the U.S. to support the development of freedom in the Middle East and northern Africa, where movements pressing for democracy have developed.

Netanyahu said, “We have an enduring bond of friendship between our two countries. … We share your hope and vision for the spread of democracy in the Middle East.”

“I think for there to be peace, the Palestinians will have to accept some basic reality. While Israel is prepared to make generous concessions for peace, it cannot go back to the 1967 lines.”

Further, he said Israel cannot negotiate with a Palestinian organization backed by Hamas, which is recognized by the U.S. as a terror organization.