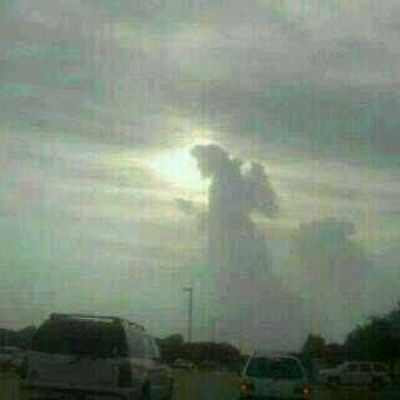 An ‘angel’ appeared in the sky above Port Elizabeth recently says Marlon Bacon who managed to snap the heavenly apparition on his cellphone before the cloud formation broke up.

He says he took the photo in Kempston Road, PE a few weeks ago while on his way to work.

“I have never seen anything like it [the ‘cloud angel’] before and it only lasted for a few seconds before the clouds changed. Another woman motorist who saw me take the photo signed me a thumb-up showing that she also saw it. He says it is difficult to describe what the angelic cloud sighting meant to him but it gave him a “good feeling inside”.

Bacon says that some of the people he shared the photo with were blessed by it while others said he must have “photoshopped” the image.

So what can be concluded from the story? It will depend upon the beholder. One thing is for certain: The heavens declare the glory of God; the skies proclaim the work of his hands (Psalm 19:1).