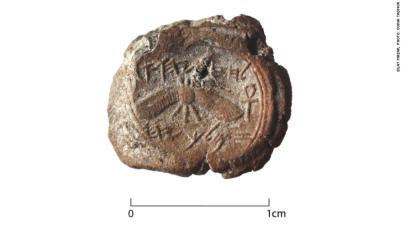 Israeli archaeologists have deciphered a seal impression bearing the name of Old Testament King Hezekiah, who is widely regarded as one of the greatest kings of ancient Judah.

According to The Times of Israel, the tiny oval piece of clay, which was found during excavations near the southern wall of the Temple Mount in Jerusalem, bears the impression of a sun with two wings turned downward, flanked by two ancient Egyptian hieroglyphs that symbolize life. In addition, the impression bears the ancient Hebrew inscription: “Belonging to Hezekiah [son of] Ahaz king of Judah.”

“This is a most unique item – it is the private seal impression of King Hezekiah,” said Dr Eilat Mazar of the Hebrew University’s Institute of Archaeology who directed the excavation. “It is the first time such an item has been found ever in archaeological excavations. It is so tiny, but we can see very easily the name of King Hezekiah and the symbols he chose to put on his impression. This was the private seal of the king that was most likely held by the king and nobody else. We found it in a Royal quarter that means we have got as close as possible to King Hezekiah.”

Although the royal seal impression was found five years ago, archaeologists didn’t realize its significance until they began deciphering the description and noticed the words “King” and “Judah.”

The tiny seal, or bulla, was found together with 33 other bullae imprinted with other seals, many bearing Hebrew names, according to CNN. The bulla was likely used to seal a papyrus scroll, and an impression of the fibers was preserved on the inverse, Mazar said, indicating the seal once enclosed a document signed by the king himself.

“Although seal impressions bearing King Hezekiah’s name have already been known from the antiquities market since the middle of the 1990s, some with a winged scarab (dung beetle) symbol and others with a winged sun, this is the first time that a seal impression of an Israelite or Judean king has ever come to light in a scientific archaeological excavation,” Mazar said in a statement announcing the discovery.

She went on to explain that Egyptian motifs were spread over the second millennium BCE all over the region, but no longer bore their original significance. Instead, ancient Judeans employed the sun disk to denote the Almighty, and its bowed wings may connote Hezekiah’s expression that “my power is thanks to God’s protection,” she said.

“It was nothing like what it meant to the Egyptians,” she said.

According to the account found in 2nd Kings 18, Hezekiah son of Ahaz and Abijah began his reign at the age of 25 and ruled in Jerusalem for 29 years, from about 715 to 686 B.C.

The Bible describes Hezekiah as a wise king who sought to obey God, destroying many of the idols that had flourished during his father’s reign.

As is written in 2 Kings 18:5, “Hezekiah trusted in the Lord, the God of Israel. There was no one like him among all the kings of Judah, either before him or after him.”

“The Bible describes King Hezekiah as one of the most important kings after King David,” Mazar concurred to CNN. “He was rich, daring, stood up against Assyrians. A very impressive king,” she added.

Mazar said that the groundbreaking discovery will help bring the Biblical narratives about this iconic king to life: “He was one of the most important figures in the Bible,” she said. “King Hezekiah is known from Assyrian documents too. This is as close as we can get to touching him.”