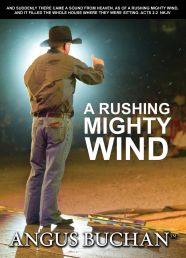 The rushing mighty wind that came up in the Ein Gedi desert, Israel, during Angus Buchan’s sermon at the opening of the Feast of Tabernacles on September 30 has been a talking point in Christian circles in recent months. Tens of thousands of people have viewed the clip on youtube and elsewhere, showing rain and blasts of wind suddenly coming up during Buchan’s sermon on revival. Before the wind arrives he reads from Acts 2 and asks God to do what he did at Pentecost when the Church was established in Jerusalem. Ein Gedi is on the western shore of the Dead Sea, 423 m below sea level. Locals say they have not seen such weather in September in more than two decades.

The DVD includes:
•  a five minutes edited clip showing the wind blowing equipment around the stage and ripping a big screen as Buchan continues to minister from the stage to the crowd who have been moved to safety some distance from the podium.
• a 25 minute commentary by Buchan, in which he reflects on the Ein Gedi experience which he says is hard to put into words. He says that he believes that “Acts Chapter 2 came alive” for the 4 500 people from many different nations who were present. He adds that they all experienced the power, the presence and the love of the Holy Spirit and that nobody who was there would ever take God lightly again.
• a 36 minute video showing Buchan’s entire message at Ein Gedi where he was preaching at the invitation of the International Christian Embassy Jerusalem.

The DVD is available in Christian book shops.