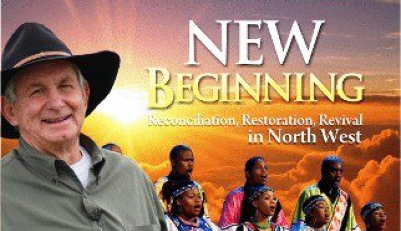 Christians in the Rustenburg area believe the darkness of the Marikana shooting tragedy will soon give way to the glory of the Gospel at a “New Beginning” crusade with Angus Buchan.

The event at the Olympia Park Stadium on Saturday, October 20 is part of an awakening by the Holy Spirit who is calling on the church to rise up and lead the way in reconciliation, restoration and revival in South Africa, said Pastor Francois Burger of Lofpark Ministries in an interview today.

He said that God has used the tragic shooting to unite Christians in prayer and achieve in less than one month what would normally take about a year to organise. By faith the organisers are expecting 35 000 people to attend the event which will be led by evangelist Buchan, the Soweto Gospel Choir and worship artist Joe Niemand.

Buchan says in a newsletter this week that he will be preaching the Gospel of Jesus Christ at Rustenburg, using 2 Chronicles 7:14 as his text.

Destiny of this nation

Outlining the remarkable sequence of events that led up to the decision to hold the “New Beginning” crusade, Burger said that groups of Christians began to meet together to pray in response to the August 16 shooting tragedy which had shocked South Africa. Cell groups gathered on September 1. A Christian men’s outreach to miners was held at a local hotel on September 6. And on March 13 Christian leaders from different churches united in prayer at the Rustenberg Civic Centre, symbolically lighting candles and then joining in a prayer walk.

“For the first time local churches took each others’ hands and agreed that South Africa belongs to Jesus,” Burger said.

‘Where are my Davids?’

At 3am the next day he said the Lord woke him and asked him: “Where are my Davids who will stand up and slay the Goliaths of this country?”.

He said God then directed him to arrange a crusade and to phone Buchan to ask him to lead it. Two years previously he had met Buchan in Bloemfontein at the wedding of a friend, Albertus Potgieter. Buchan, who conducted the wedding, gave him his business card and said he should call him if he ever needed him.

Burger said he knew that it would normally take a year to arrange a big stadium event led by Buchan but he decided to call any way and trust God for the outcome. He called — but inadvertently dialled Potgieter’s number which he had written on Buchan’s card. When Potgieter answered he disclosed that he was at the TBN studio in Tennessee, USA, with Buchan and Billy Graham. Potgieter relayed Burger’s request to Buchan who replied that he would pray about it and would discuss it with people in America.

Executive Mayor
Thereafter, Burger said the Lord led him to send an email to the Executive Mayor of Rustenburg, Mpho Khunou, outlining the proposed crusade. Within half an hour the Mayor responded positively and said the city would sponsor the cost of the stadium.

The Rustenburg church community sprang into action to start organising the event. And a week ago Buchan, who was back from the US, called Burger and asked him to come and see him at his farm in KwaZulu-Natal.

Burger said he and 17 fellow Christians from the area boarded a bus for KZN at 3am. He said Buchan was overwhelmed by their faith and energy and by the next day he committed himself to leading the crusade.

Preparations for the event are in full swing now. More and more church leaders from all sectors of the community are coming on board. Church groups are visiting mine compounds daily to invite miners to attend the event. More than 100 busses will be used to ferry miners to the crusade.

“It will be a true Rainbow Nation event,” said Burger.

The gates will open at 11:00 on October 20 and everyone is welcome, whether they are from the area or from other parts of South Africa. Tickets are available on iTickets for free but Burger appealed to churches and businesses and individuals to each make a small donation towards the substantial costs which were being undertaken in faith. Donations can be made by clicking on the donation box on iTickets. More information about tickets, bookings and alternative methods of donating can be obtained from Willie Marais at 083 408 2303 or willie@g12.co.za or from Lofpark Ministries at info@lofpark.com.