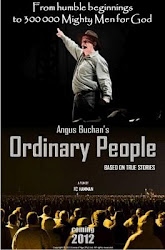 In anticipation of the release of Angus Buchan’s Ordinary People on April 5, 2012, Ster Kinekor Entertainment has opened ticket bookings to the public for two “sneak-previews” of the film. Capetonians can catch all the action at N1 City on Wednesday March 14 March at 8pm, while Joburg film lovers can enjoy the movie at The Zone on Thursday March 15  at 8pm.

Based on true events, this film follows three parallel plot lines of ordinary South African men in the build up to their attendance of the Mighty Men Conference on Buchan’s KwaZulu-Natal farm, Shalom, in 2010.

With limited tickets available, members of the public are encouraged to secure their seats before they are sold out. Tickets can be purchased on Ster Kinekor Theatres’ website www.sterkinekor.com.  Movie goers can visit the site, scroll down the coming soon strip, and simply click on “book” to make their reservation in the city of their choice.