[notice]UK-based South African-born journalist Charles Gardner reports from the UK at the Crossroads conference in Manchester.[/notice] 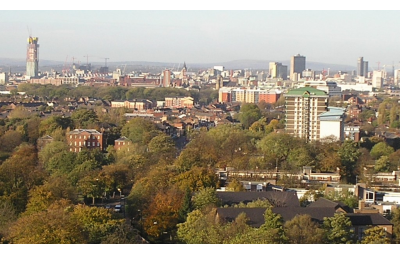 With the Middle East engulfed in flames, a story of peace and reconciliation was unfolding last week in Manchester, England, where delegates from all over the Arab world came together for a unique conference.

And as Iran continues its aggressive stance against Israel, threatening to wipe the Jewish state off the map, Iranian refugees and asylum seekers now living in Britain embraced their Jewish ‘brothers’, some of whom had travelled from Jerusalem to meet with them.

Also present was a sizeable contingent of Egyptians along with representatives from Sudan, Saudi Arabia, Jordan, Turkey, Iraq, Lebanon and Algeria. Others wanting to join them had been unable to get visas.

As part of the great untold story of the Middle East, the three-day conference was hosted by the Church’s Ministry among Jewish people (CMJ), a 200-year-old Anglican society specifically dedicated to spiritual revival in Israel.

Although working mainly among Jews since its founding in 1809 by slave trade abolitionist William Wilberforce and others, CMJ has also consistently reached out to Arabs over the years and, in 2012, held their first At the Crossroads conference at their Jerusalem headquarters to enable Jew and Gentile to express their oneness in Christ and work together to spread the gospel on the basis of a prophecy from Isaiah (chapter 19) of a “highway” of peace and reconciliation from Egypt to Assyria (which includes much of the modern-day Arab world) via Israel.

For the second of what is now a bi-annual event, in 2014, a number of UK-based Iranians, as well as a group of Egyptians, were turned back at the border and thus missed out on a chance to meet up with other Muslim-background converts from all over the region at a conference hosted by Jewish believers in Jesus, generally known as Messianic Jews.

And so UK at the Crossroads was arranged to encourage and inspire those who would struggle – mainly due to visa issues – to enter Israel.

David Friedman, a Messianic rabbi from Jerusalem, was delighted that so many Iranians had turned up for the conference – they have established thriving churches throughout England – and implored them to join him in praying for barriers to be broken between their two countries.

“We need to get together and pray for our two nations,” he said. And before he had finished speaking, they came forward to pray for him, and for Israel! It was an awesome moment, something akin to an earthquake in reverse as a shattered and broken world is put back together again, with all the pieces mended.

Sessions were interspersed with times of worship in Arabic, Farsi (the language spoken in Iran), Hebrew and English creating a beautiful atmosphere of shared love and identity. Communication may have been a challenge at times, but you only had to look in each other’s eyes to know you were one in Christ who, in the words of St Paul, destroys the dividing wall of hostility, creating “one new man” out of the two, thus making peace and reconciling both of them to God through the cross. (Ephesians 2.14-16)

One Egyptian musician was playing a lute, a modern version of the ancient instrument played 3 000 years ago by Israel’s King David. Prayer was also offered in various languages with translators on hand for some of the speakers.

Beirut-based Robert Sakr, one of the visionaries behind the conference, said: “There’s no such thing as a peace process apart from Jesus. In the 55 years I’ve lived in the Middle East, there has been no political solution.”

And it was ironic, in light of the current enmity between Iran and Israel, that when the 1967 Six-Day War broke out, his family fled to Iran for safety. But the Islamic Revolution of 1979 had changed all that.