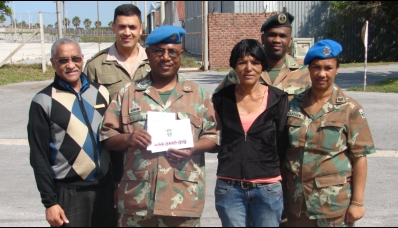 The army and police will be out in full force on the streets of Port Elizabeth on Friday, October 21 in a joint 10km “Walk for Jesus” prayer march and gospel outreach.

The march through the streets of Forest Hill, Summerstrand and Humewood, will start and end at the Forest Hill Military Base, said Mr R J Moses, one of the organisers of the event which takes place the day before a historic mass prayer event in the Nelson Mandela Bay Stadium.

Moses said that the army prayer convenors  had invited police to join their march in recognition of the police’s commitment to prayer walks in various parts of the city. The police are playing a leading role in calling the Christians of Nelson Mandela Bay to the stadium to pray for the metro on October 22.

Army members participating in the October 21 march will wear t-shirts with a Bible verse slogan from Hebrews 10:25 and will carry banners and distribute Christian leaflets. Police marchers are expected to be in uniform.

Moses said prayer march initiative grew out of a well-supported daily prayer meeting movement that was started at the military base by personnel linked to the South African Military Christian Fellowship. He said prayer meetings were held daily at the base at 10am and at lunchtime

Corporal Henry Kamm, another member of the prayer march organising team, said that as a result of the regular prayer meetings at the base, people often brought prayer requests to the prayer group leaders. Some people who had been prayed for had overcome alcohol abuse problems and had joined the prayer group. When people at the base were sick, prayer group members were oficially asked to pray for them.

“We have seen people healed,” he said.

He said that when army chaplains went on leave members of the prayer team were asekd to conduct daily devotions on their behalf.