[notice]Beverley Bestbier, operations manager for CompSol, based in Port Elizabeth, South Africa, shares the impact the GLS is having on her company, and why she brings her team back every year.[/notice]

CompSol’s journey with GLS started in 2012 when a handful of our managers and assistant managers attended the conference in Port Elizabeth.As soon as it started, it felt as if the conference was especially designed to speak to each of us personally—no matter our leadership level. We attended the same conference, but we each went home with a different personal message on how to improve as a leader.

Register for GLS 2016 now and find out more at www.willowcreeksa.co.za

Over the next year, we continuously found ourselves referring to GLS sessions. In difficult and trying times we said, “If you are not dead, you are not done” and reminded each other constantly that “everyone wins when a leader gets better.” A difficult conversation was made easier by referring back to a GLS session with Joseph Grenny and using his ideas to work through it. We bought resources at the GLS which we read, re-read, referenced and discussed at length during our meetings. Bill Hybels’ books have impacted the format of how we hold our meetings, and we have implemented our own umbrella system with “crazy” ideas.

When we attended again in 2013, we were reminded to be courageous through every challenge we faced into the next year. It was an amazing experience to see how our group was being transformed, so we made the decision that the GLS is a must for all the leaders in our company.

In 2015 we announced a GLS readiness campaign to our company. The team was excited and expectant for what was to come.

The 2015 GLS finally arrived, and our whole team was there. Before it started, I looked across the row at the faces of our team, and they were excited after the build-up we created all year.

The GLS experience absolutely outperformed the expectations of our team. 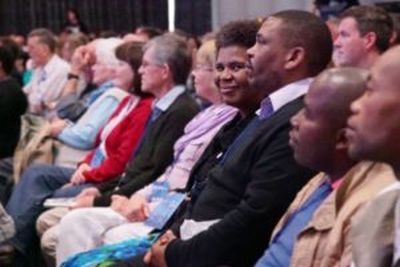 During the conference, each leader was in the moment, perfect for the season they were in. It was amazing to experience each message matching our leadership challenges that year. As I looked at my team’s faces, the impact the words were having on them was evident; at different times some of the leaders became emotional. Each message was powerful.

As the conference drew to a close, we joked, saying that the next session could not possibly beat the impact of the previous session. Yet the ending was perfect with Craig Groeschel’s 5 Cs. We each stood up when our C was called—be it Confidence, Connections, Competence, Character or Commitment.

We each took a personal stand to expand our leadership in 2016.

We are keeping each other accountable to exercise our C’s and we have expanded the GLS footprint in our company. We now have a weekly time slot where we show a GLS clip, exposing our entire company to the GLS messages. As you can imagine, Horst Schulze has become a particular favorite when we speak about client service.

One of my team members says it best: “The GLS has helped me to accept and embrace God’s will in my life, not only as a leader, but also as a daughter, sister, mother and wife. To have this opportunity to listen and learn from such inspiring leaders has resulted in life-changing growth in all aspects of my life.”

We bought our tickets for the 2016 GLS and our team will be there ready to listen—really listen—and ready to grow as leaders. Everyone at CompSol will win as the leaders are willing to grab hold of the messages and become better leaders.