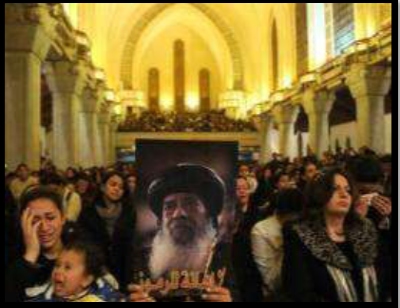 [notice]Pope Shenouda III, the patriarch of the Coptic Orthodox Church who led Egypt’s Christian minority for 40 years during a time of increasing tensions with Muslims, died on Saturday 17 March 2012. He was 88. The state news agency MENA said Shenouda died after battling with liver and lung problems for several years. Tens of thousands of Christians packed into St Mark’s cathedral to mourn on Saturday evening. INcontext Ministries reviews the implications of Shenouda’s death for the Arab world.[/notice]

“Baba Shenouda,” as he was known to his followers, headed one of the most ancient churches in the world, which traces its founding to St. Mark, who is said to have brought Christianity to Egypt in the first century.

Associated Press reports that Shenouda’s death comes at a time when Egypt’s estimated 10 million Christians are feeling more vulnerable than ever amid the rise of Islamic movements to political power after Mubarak’s ousting a year ago. The months since have seen a string of attacks on the community, heightened anti-Christian rhetoric by ultraconservatives known as Salafis and fears that coming governments will try to impose strict versions of Islamic law.

Shenouda was born Nazeer Gayed on 3 August 1923, in the southern city of Assiut. After entering the priesthood, he became
an activist in the Sunday School movement, which was launched to revive Christian religious education. At the age of 31,
Gayed became a monk, taking the name Antonious El-Syriani and spending six years in the monastery of St. Anthony. After
the death of Pope Cyrilos VI, he was elected to the papacy in 1971 and took the name Shenouda.

Internal exile
Shenouda’s one significant clash with the government took place in 1981, when he accused then-President Anwar Sadat of
failing to rein in Islamic militants. Sadat said Shenouda was fomenting sectarianism and sent him into internal exile in the
desert monastery of Wadi Natrun, north of Cairo. Sadat was assassinated later that year by militants. Mubarak ended
Shenouda’s exile in 1985. The incident illustrated the bind of Egypt’s Christians. When they press too hard for more
influence, some Muslims accuse them of causing sectarian splits. Many Copts saw Mubarak as their best protection against
Islamic fundamentalists — but at the same time, his government often made concessions to conservative Muslims.

During the 1990s, Islamic militants launched a campaign of violence, centered in southern Egypt, targeting foreign tourists,
police and Christians until they faced a heavy crackdown. Muslim-Christian violence has flared repeatedly in the past decade,
mainly in towns of the south and in the Mediterranean coastal city of Alexandria. Sometimes it was sparked by local disputes
that took a sectarian tone, sometimes by disputes over the building of churches. At the same time, Christian emigration has
increased tremendously. Coptic immigrants in the United States, Canada and Australia number an estimated 1.5 million,
according to the pope’s official website.

Widespread influence
From a Christian perspective, the role of the Coptic Church within an Arab World context cannot be ignored, nor can it be overstated. According to Operation World, there are 9.4 million Coptic believers in Egypt but Coptic Church officials estimate
that there are as many as 16 million. Even though Protestant churches play a huge role in evangelism they only claim a
membership of about 300,000 in Egypt. Looking wider, it is estimated that between 35 and 45 percent of all believers in the
Arab World can be traced back to the Coptic Church in Egypt. Thus the widespread influence of this Christian community
makes it irreplaceable within a broad mission context.

Whoever succeeds Pope Shenouda III will play a major role in a time when a region in turmoil is seeking more than just
political answers. A mission-minded Pope will re-invent a vibrant and missional Church, but the opposite will also be true.
The new pope now faces the task of reassuring the Coptic community of their role in society, as the Islamists of the Muslim
Brotherhood are set to take power in Egypt for the first time. Many younger Copts will be looking for a leader who can help
redefine their community’s role in a rapidly changing post-Mubarak Egypt.

Not only in Egypt but across the borders of 23 Arabic-speaking nations, the Coptic Church, her leaders and her members are
called to be a witness to a community in need. Thus Pope Shenouda III’s successor will greatly influence the reshaping of
Christianity in the Arab World. There are a number of candidates in line as successors, some of whom are already involved in
mission activities.

This, coinciding with the Arab Spring, and opening hearts within the once-closed Muslim community, could be the spark for a
revival that many Arab believers are praying for.