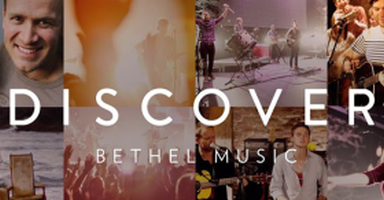 Dove Award-nominated Bethel Music, the worship ministry of Redding, CA-based Bethel Church, has grown over the last four years from being a local church music ministry to becoming a global outreach featuring a cadre of songwriters and worship leaders, and both online and on-campus worship schools. With the exponential growth of the ministry comes the first compilation recording, Discover Bethel Music, which releases this week globally through Fuel Music Distribution. The album highlights 16 of the favorite Bethel Music worship anthems spanning a half-dozen CDs and chart-topping songs.

Discover Bethel Music catches up newcomers to the fresh and inventive music that has inspired worshippers around the globe to lift their voices in praise. The recording includes such favorites as “Love Came Down,” which was featured on American Idol as part of a “Songs I Wish I’d Written” night, and “One Thing Remains,” the chart topping song that gathered 2013 Dove Award nominations for both “Song” and “Praise & Worship” Song of the Year. The project also features “Where You Go I Go,” “I Will Exalt,” “God I Look To You,” “This Is Amazing Grace” and 10 more worship favorites.

Hitting the iTunes® main page spotlight under “New Releases” this week, Discover Bethel Music is available to purchase now at this link, http://georiot.co/1eUC.

The full Discover Bethel Music track listing is below:

The new compilation follows Bethel Music’s first-ever studio album, TIDES, which released Sept. 3 to unprecedented international acclaim. Worship Leader calls the album “outstanding congregational music from one of the most influential teams in the worship genre” while NewReleaseTuesday.com says the album is “one of the best of the year.” Kari Jobe tweets, “Been listening to the new @BethelMusic album all day. So amazing!”

The album also became the biggest debut ever for Bethel Music, selling 14,943 copies in its first week at retail, hitting No. 30 on the Billboard Top 200, No. 12 on the Overall Digital Albums and No. 1 on the overall Top Christian/Gospel Albums and Praise & Worship Billboard retail charts. The album further hit as high as No. 7 in the U.S. and No. 10 in Canada on the overall iTunes® album charts, while sparking the most downloaded digital Christian single of the week with the Jenn Johnson led “Chasing You.” The song is about following God with insatiable abandon and became the first Bethel Music single to ever be serviced directly to radio, garnering plays on the Air1 Radio Network, Reach FM Network, WQME FM (Indianapolis), WHRZ FM (Spartanburg-Greenville), WFRN FM (South Bend, IN) and more.

In addition to the single,” TIDES is filled with songs of adoration, instruction and worship that speak not only of what God has done, but also what He is doing now, in the highest and lowest of tides. Featuring Bethel Music’s Brian and Jenn Johnson, Jeremy Riddle, Steffany Frizzell Gretzinger, William Matthews, Matt Stinton and Hunter Thompson, TIDES is an expression of passionate emotion, anthemic declaration, and sometimes surprising experimentation.