Times like we had at the Bethel Worship Nights are weaving threads of His story through South Africa. It stamps something on your heart when a huge crowd gathers to sing out their love to Jesus. I saw Jesus enthroned upon our praises at the Voortrekker Monument, and I know it to be true that the same thing happened in the major cities of Cape Town and Durban on nights following Thursday in Pretoria. When we worship like this, we tap into our true identity.

At the press conference before the event, Jeremy Riddle said he hoped we would prophesy life and destiny over ourselves that night, and over our land. I believe the whole evening was a prophecy and a declaration of hope.

Right now in South Africa, we are at a time where our identity is being established, restoration is taking place, and the foundations are being checked and re-built so that we can move forward.

The beauty of a night like Thursday, is that God released something for the church, the country and for individuals at the same time.

When asked about what they hoped to see released prophetically, Hunter Thompson, said he felt God wanted to remind people that He likes to cup their faces, and get right up close. It’s just not about the big experiences but about how He influences a small amount of people. And what the Lord is doing is taking a large amount of people and making it an intimate encounter. He is teaching our country how to have personal relationship in the midst of chaos, the political climate and in the midst of large gatherings, He is taking people and drawing them really, really close to His heart.

How the Church influences
Picture 20 000 people all having intimate encounters with God, and the effect that has on the atmosphere. That is how the Church influences. When we dwell in that place of surrendered encounter with Him, we are intimidating to the enemy. We represent the gospel, as it is broadcasted live from our hearts.

When we set our eyes on Him, and worship with trueness of heart, anything really is possible. 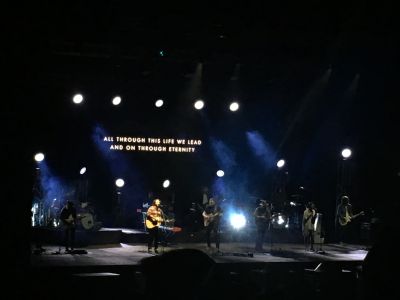 ‘”For your name is life, Your name is hope inside me”, the sound waves from our voices carried through the open air. The waves seem to carry so far across a thirsty land. Into our thirsty hearts. Into my thirsty heart.

“He has heard our cries, He knows your visions and dreams”, — Pastor Eric declared these words over us, and then asked us to take prophetic action over our destiny and the destiny of our country. So we all joined hands and raised them up high and sung We Will Not Be Shaken in unison.

Fountains of hope
We sang with everything we had, and as we did I could feel the ground cracking and shaking. I saw wells springing from the dry places. Fountains of hope that never will run dry, because they are inside our spirits, where no storm, no torrent and no hard times could ever reach! Barricaded in by pillars of joy.

He is making us unshakable. Oh we are learning to stand in awe of Him.

I saw mantles of identity placed on people as they worshipped from the depth of their beings.

I saw giant blue swells of His presence rising, getting ready to burst over His people, over this land! He is turning the tide.

And as the war drums played, battalions of Angels were sent out across the nation to accomplish the declarations of the saints. For that is our favour — that He hears us.

Orphans you can come home, we are welcoming you!

Brave and willing
So my question to all of us is: are we brave enough to go beyond the first wave of His presence, and into the unknown and the new, the blessings, the wonder, the opposition, the joy and the total surrendering of control? Are we willing to let wave after wave crash over us so that we become completely submerged into a new reality where the fullness of His plan and our identity can be lived out?

Your wholehearted ‘yes’ and surrender is no drop in the ocean, it’s not one in a million. It’s one that is part of a million. It’s a vital part of what makes us a manifestation of the kingdom of heaven seen here on earth.

He is calling us deeper.