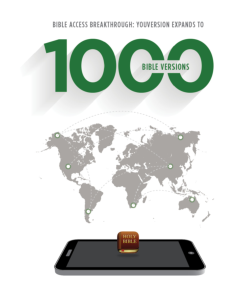 In another major milestone, the wildly popular and free YouVersion Bible App has expanded to more than 1 000 translations of the Bible in over 700 languages.

“It’s unprecedented in history having so many Bible versions in the palm of your hand—something we never imagined was possible even a few years ago,” said Bobby Gruenewald, the app’s creator and Innovation Pastor of LifeChurch.tv in Oklahoma. “This milestone wouldn’t be possible if not for the Bible translators and the more than 150 publishers, Bible societies, and organizations that have collaborated with YouVersion.”

So which version clocked in as the Bible App’s 1000th? It’s the Deftera Lfida Dzratawi, the first digital translation of the New Testament into Hdi, a language spoken predominantly in the West African nation of Cameroon.

Since 1987, Wycliffe Bible translators have collaborated with Cameroonians to learn and analyze the dialect as they composed the first Hdi (pronounced huh-DEE) edition of the Bible, published and distributed in print in 2013.

“To see this labor of love now go digital with YouVersion is incredible as we see the potential to reach the nearly 45,000 Hdi speakers in Cameroon and nearby Nigeria,” said Bob Creson, President and CEO of Wycliffe USA, who also thanked project partners SIL International and the Cameroon Association for Bible Translation and Literacy.

Often there are divinely inspired moments of discovery when translating the Bible into a language, particularly for the first time. Such was the case with Hdi, revolving around the verb “dvu,” meaning in essence to love unconditionally. For centuries, this word was known to Hdi speakers, but rarely used. Instead “dva” was used far more often. For example, a man would dva his wife, but his love was conditional based on how useful and faithful she was.

When local Cameroon community leaders, who were part of the Hdi translation committee, realized that dvu best expressed God’s love for them and the kind of love he wanted people to mirror in their lives, it opened their eyes to an entirely new way of experiencing their faith.

“God had encoded the story of His unconditional love right into their language. Properly translated and understood, God’s Word has incredible power to change lives and communities. It can transform the way people relate to God and others, including women, providing an entirely new world view,” added Creson.

Downloaded on over 150 million devices, the Bible App now reaches 87 percent of the Christians worldwide who have Internet access, offering more written languages than any other app on the planet. The app offers Bible translations embraced by Catholics, Evangelicals, Protestants, Russian Orthodox, and even Messianic Jews along with countless other denominations.

An Infographic created for the 1 000 Bible versions milestone shows what languages have the most downloads of the Bible app to date.

“We are thrilled to play our part, sourcing the Bible translations that make this landmark reach of Scripture engagement possible,” said Gary Nelson, chairman of Every Tribe Every Nation, a YouVersion partner that has been instrumental in contributing to the milestone. “It’s a tremendous picture of what is possible as great teams and technology come together, committed to a day when no one on planet earth would live beyond hope of God’s Word.”

We’ve come a long way since the first handwritten English-translation of the Bible was published in 1380. “Technology in recent years has dramatically reduced the time it takes to produce a first-language translation from decades to a few years. Within two weeks of completion, in the villages we serve people can access the text on their cell phones. What a blessing!” said Lois Gourley of SIL International, a Christian nonprofit dedicated to studying, developing, and documenting languages, especially lesser-known ones.

The following link displays some of the lesser-know language on the Bible App.

Despite the impressive milestone of more than 1,000 versions in over 700 languages, YouVersion and its partners have plenty of work ahead. With 6 901 distinct languages in the world, thousands are still waiting for translation to begin or to be completed.