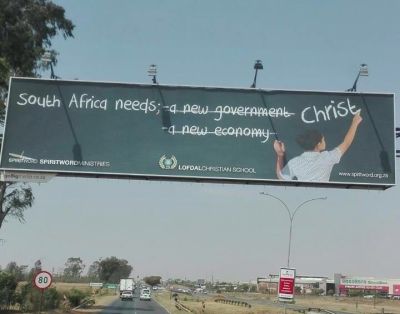 In a country that seems to be stumbling from one political crisis to another educational emergency via an additional economic crunch that are all man-made, the message that “South Africa does not need a new government or a new economy, but Christ,” cuts through the clutter of the nation’s challenges to the essence, which is refreshing indeed – like a shower of cold water on a scorching day that seems not only to refresh and revive the body, but clear the mind.

Gateway News was made aware of the billboard by Mark Upman, a Port Elizabeth pastor, who posted the above picture on a church-leaders’ Whatsapp group.

Mark found the billboard’s message to be “Awesome!”

“I thought, wow that is quite a statement and exciting that we can still put up signs like that in South Africa. I posted it onto our group, here in Nelson Mandela Bay as an encouragement, because there has been so much negative activity going on in the country.

“The billboard encourages us not to lose hope and to know that Christ is the answer.” says Mark.

“We must never allow the temporal challenges to take our focus off Christ, who is our eternal answer,” he adds.

Petrus Janse van Rensburg, head of media at Spirit Word Ministries that is responsible for the billboard signage, which is near their church campus in Stilfontein in the North West Province, says the billboard is used to promote Christianity and the church’s beliefs.

He says the particular sign was erected during the build-up to the recent local government elections.

“We felt that for our country’s challenges to be resolved it is not so much government that needs to change as it is the hearts of our country’s people – we need Christ.”

Kobus Janse van Rensburg, head Pastor at Spirit Word Ministries, says the sign was erected in response to so many South Africans looking to government and economic institutions for answers when we as Christians have the answer within us – Christ.

“I read somewhere that, ‘It is not the people making the wrong decisions that cause the mess we are in, but the people that know the answer and keep silent’, which is the standpoint we came from when erecting the billboard sign.

“We all know South Africa needs change, but change happens with us, the change will happen when Christians take their place and start praying for South Africa and when we, who have the answer, start being the light of the world by extending the Light Of The World to those around us, instead of keeping Jesus Christ to ourselves.

“Instead of looking for the answers in external sources, we need to look within and start being the light of the world; then we will see change in South Africa.

“We that have the answer need to be the answer. Everybody knows we need change and everybody wants change, but I truly believe the only way sustainable change will come to our country is if Christians be who they are supposed to be, which can only happen if we rely on Christ instead of on our own power, effort and actions.

“We hope the billboard planted seeds in the hearts of people to stand-up, be Christians and keep their focus on Jesus Christ.”

Pastor Kobus says the signage provoked reaction with a number of people having visited Spirit Word Ministries to learn what the Church is all about as a result of seeing the billboard. He says no negative comments were received, only positive feedback.