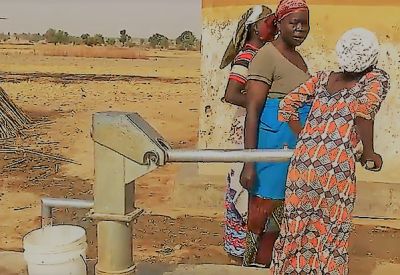 Gloria Shehu is one of the people in north-east Nigeria set to benefit from the UN’s humanitarian fund targeting the devastation from the conflict with Boko Haram.

Yesterday (17 May) the agency stepped up a call for more money, reminding that “the number of people close to sliding from emergency to disaster is perilously high” in the area – where 3.8m people have no access to safe water. In northeast Nigeria, 75 per cent of water and sanitation infrastructure in conflict-affected areas has been damaged or destroyed. Displaced families are putting enormous pressure on already strained health and water systems in host communities. One third of the 700 health facilities in the hardest-hit state of Borno have been completely destroyed and a similar number are non-functional.

Gloria is fortunate, she’s already living near a borehole sunk by an NGO that works in the north, and which seeks to fund-raise for extra support to extend its work, especially in the north-east conflict-hit area.

A reporter from the charity met her on her visit to the pump in a village in the northern state of Katsina.

On a hot day, with a dry wind blowing up clouds of dust from the parched earth, Gloria waits her turn at the community water pump. Not irritated by the wait, she chats to the young woman in front of her who pumps the mechanical arm that brings a stream of water from the spout. It would be a strenuous task for those not used to this way of life, but she does it effortlessly – it’s an everyday chore, after all.

With her 20 litre container filled, Gloria carries the water home, later using some of it to prepare a meal in her outdoor kitchen. Her daughter sifts flour while Gloria fills a pot with water and stokes the fire. She adds water to the flour and stirs it to dissolve the lumps. Before long Gloria tests her porridge and declares: “It is ready”.

Gloria’s routine may seem wearisome, but she does not complain. “We didn’t have clean water to drink or even to cook with. But now we are able to get clean water.”

Her village – a Christian community in a majority-Muslim state governed by Sharia law – had gone without a proper water point for a long time. The community felt sidelined when it came to the provision of social amenities.

Before the borehole, which was funded by the Christian charity, Open Doors, she and her fellow villagers got water from a stream nearby where they risked diarrhoea, typhoid and other kinds of water-borne diseases. They were often sick.

These circumstances are not unique to Gloria’s village. Christians across the 12 Sharia-governed states of northern Nigeria feel neglected or, worse, antagonised by local society because of their faith. They say local governments make life difficult for them by sidelining Christian villages in the provision of basic services like water points, clinics and schools. It means travelling a long way to get water, which might be from either a contaminated stream or from a neighbouring Muslim village where they can regularly face intimidation.

The provision of boreholes has improved the quality of life for those living in Christian communities in the northern states. Open Doors installed 44 pumps between 2009 and 2016 in the states of Kano, Kaduna, Katsina, Niger, Gombe, Bauchi, and Plateau.

Local governments in these areas sometimes failed to provide any access to water. In other cases, boreholes were installed poorly, some never working at all. When the new pumps were installed, local people were trained to maintain them.

Before the boreholes were installed, people could travel 3 km to fetch water. Asabe Danjuma said for women this was a big challenge: “Most of our time was spent looking for water. It was very frustrating.”

The boreholes give an opportunity for different faiths to mix.

“Now our neighbours, who are Muslims, also come here to fetch water. We are so relieved,” she said. Fulani herders, a group known to have killed Christians in Nigeria’s middle belt states, also use the boreholes.

Ready access to fresh water means villagers can get on with their lives, farm and provide for their families rather than spend much of their time just looking for water.

“I cannot describe our suffering. It was just too much,” said Joseph, a man from one of the villages with a new borehole. “Now that we have abundance of water, I think it is a wonder that we all survived those days.”

The adoption of Sharia law by 12 Nigerian states in the 2000s led to widespread discrimination, many Christians believe. They say they are treated as second-class citizens and denied basic rights, such as access to education or certain jobs. Access to land and building permission are very restricted or denied. Land, school or health services belonging to churches are often confiscated by state authorities without any compensation.

Despite churches also facing demolition, some manage to contribute to the aid effort in north-east Nigeria during what was recently described by the UN as “the greatest crisis on the African continent“.