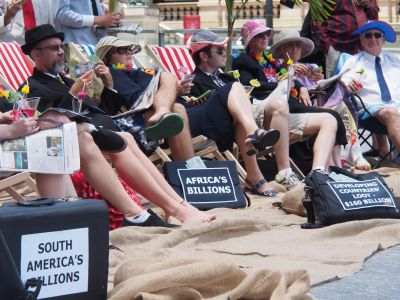 With the eyes of the world on Brisbane ahead of next week’s G20 Summit, local Micah Challenge advocates are seeking to make the most of the spotlight.

On Saturday, November 8, approximately 100 advocates from churches across Brisbane dressed as corporate accountants transformed part of Brisbane’s CBD into a tax evader’s paradise of palm trees, mocktails, beach chairs and briefcases to shed light on the issue of multinational tax dodging.

Approximately $160 billion is robbed from developing nations annually, more than the $128 billion received in foreign aid in 2012. With this tax revenue available to developing countries, it is estimated that around 350 000 children a year could be saved.

Supporters of the Micah Challenge anti-poverty campaign hope the world’s largest mock tax haven will send a clear message to G20 leaders that more action must be taken to address secrecy in the global financial system for the benefit of the world’s poorest people.

According to John Beckett, National Coordinator of the Micah Challenge campaign, the issue of corporate tax dodging is seriously undermining progress against global poverty.

“Extremely conservative estimates show that poor nations are losing more money through tax dodging than they receive in foreign aid – with some suggesting it could be up to two or three times as much,” said Beckett.

“This money rightfully belongs to the citizens of these countries and should be used to provide essential services like healthcare, education, infrastructure and water. Instead, much of this money is being siphoned off through tax havens into the pockets of the wealthy.”

“We’re concerned the decisions made could primarily benefit wealthy countries represented at the table, and not the citizens of developing nations,” he said.

“As host of the G20, Australia has an opportunity to play a key role in leading concrete action to promote greater transparency in the global financial system. The recent release of a global standard for automatic exchange of tax information is a step in the right direction, but this won’t work in isolation. More action is needed.”

In order to ensure tax is paid in the country where the economic activity takes place, Micah Challenge supporters want G20 leaders to advance the push on multinational corporations to publicly report their operations and activities in every country in which they operate.

“Making this information publically available will reduce the ability of multinational companies to evade their fair share of tax and allow citizens to hold governments to account for how they raise and spend corporate tax revenue,” said Mr Beckett.

“With the world suffering around us, it’s no time for a talkfest – it’s a time for strong action.”

In partnership with the global EXPOSED campaign, Micah Challenge handed over an Open Letter for G20 leaders to Parliamentary representative Senator Claire Moore at the mock tax haven event. The letter has been signed by over 90 global church leaders – representing approximately 1 billion Christians worldwide who are calling on the G20 to take action on corruption, within multinationals and by government officials.