The small, enthusiastic, band of Middelburg farmers who are organising this year’s Karoo Mighty Men Conference need 4 000 men to come to the party as co-hosts of the event.

At least that is the view that was expressed around the table at a KMMC marketing committee meeting in Middelburg yesterday, where the hope was expressed that men who attended last year would step up to the plate and invite other men to join them at this year’s event from April 27 to 29.

Guys who attended last year would be making a mighty contribution to the success of this year’s event if they each prayerfully invited a few men, and also registered and paid their R200 per person fee online now. This would be a huge morale booster to the organisers, would help them with their current cash-flow challenges,  and would have the potential of making an eternal difference in the lives of men, their families and be a blessing to the nation.

Chatting to KMMC marketing duo, Ruthie and Ponnie van der Merwe yesterday, it emerged that the KMMC 2012 committee , comprising 12 Middelburg locals, is so committed to the vision of providing men with an opportunity to meet significantly with God, that they had no hesitation in accepting the substantial financial risk, the hard physical and organisational work and the substantial prayer commitment that comes with hosting a Mighty Men Conference.

“If you have seen thousands of men putting up their hands to respond to Jesus at a Mighty Men camp then souls become a reality,” said Ponnie.

The reality of hosting the KMMC is that the organisers commit themselves to hard costs of R800 000, most of which is for the stage and audio visual setup required for a mass outdoor event. The hard physical work, which is willingly shouldered by the local farming community of 70 to 80 people, involves erecting the showers, toilets and readying roads for the men who will camp on the farm Renosterburg during the event. About 4 000 men attended last year, but by faith and because of their desire to see multitudes of men restored to God and their families, the oganisers are once again preparing facilities for 30 000 campers.

The fact that the farmers carried a financial loss last year has not deterred the committee at all from pursuing this year’s programme with zeal. And it promises to be an awesome programme, with Mighty Men founder Angus Buchan, former policeman, Johnny Louw, and former freedom fighter Douglas Baartman all lined up to speak to the men. And once again, popular Christian musicians Retief Burger and Joe Niemand will be leading praise and worship.

According to Ruthie and Ponnie, the farmers who are hosting the KMMC are by nature a generous-hearted group who would love to offer free entry to the event. If it was not for the R800 000 budget commitment that is what they would do. If there was a healthy kitty after this year’s event as a result of a big attendance, then the organisers would pass the benefit on to future attendees by reducing entrance fees. 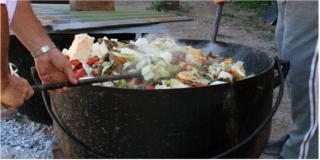 The Middelburg farmers are however expressing their generosity and hospitality by providing men at the KMMC with free Karoo mutton and wood for a potjie meal. Those attending the KMMC will have the rare opportunity to enjoy sharing a potjie meal cooked in a pot big enough to feed 2 000 people.

Dave Turner, one of the local organisers, who is a farmer in the Middleburg district and a lay pastor in a local church, says those attending the KMMC are encouraged to bring their potjie pots so they can enjoy a time of fellowship while cooking potjies and then sharing a meal together with other mighty men.
Turner says the mass potjie gathering will take place on Saturday April 28.

“We want to encourage visitors to the KMMC to fellowship, break bread and pray together around their potjies, which will give the KMMC a special flavour.

“Middelburg farmers will provide the meat and wood, while each pot owner should bring the rest of his potjie contents and his expertise.”

Karoo farmer Andries Botha, who spoke at last year’s KMMC and will again bring God’s Word to the 2012 conference is also bringing the giant potjie-pot-for-2 000, which became central to a tradition of sharing a meal during an annual celebration of Reconciliation Day by farmers and farm workers on his farm near Somerset East.

All those men interested in participating in the mass poitjie gathering should contact Ruthi at info@karoommc.co.za or cell no 079 947 3566.

So, getting back to the thoughts that were expressed around the marketing meeting table yesterday:  any men reading this article who were at Middelburg last year, or who have previously attended MMC events on Buchan’s farm in Greytown, are you in? Your past involvement does not mean that you have “been there and done that”. It means that you are perfectly positioned to be a co-host at this year’s Karoo Mighty Men. Hope to see you and your friends there!