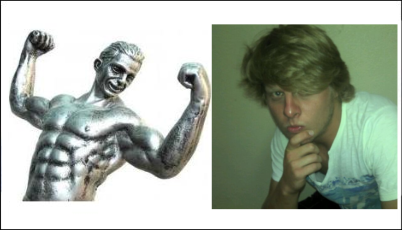 [notice]KURT VAN VOLLENHOVEN (pictured above right) is not impressed with ‘modern man’s’ phony image and lack of involvement. Read his ‘Righteous Rant’. Gateway News invites you to submit your Righteous Rant to news@gatewaynews.co.za for possible publication in this new, occasional column where readers get to share what’s on their heart.[/notice]Society has allowed western culture modern man to create an image of himself that is really larger than himself – a façade of ruggedness, of strength and prosperity. Men don’t fight anymore, we don’t fight with swords, spears or shields. The modern man can now hide behind a hotshot highly-paid lawyer when battling his foes. He can sit behind a PC and send a strongly worded email or a Facebook inbox to resolve conflict.

Modern man wants to inflate his image with flashy cars, expensive suits and large mansions to attract a member of the opposite sex. Modern man can create a profile from behind his PC on any social media site and “live” through this avatar of who he wishes he was. He can use IM apps to sweet talk and chat up a lady. Where is the personal touch and where is the face-to-face contact? Where is the standing in the presence of a beautiful woman and not stumbling over your words while conducting yourself as a gentleman and being who you were created to be?

My dad met my mom on the beach through a mutual friend and he had to (like a man) go and get this new aquaintance’s number, call her and ask her out on a date. They still used landlines in those days, there was no Whatsapp, BBM or MXit? I’m thankful that Telkom didn’t let him down otherwise I wouldn’t be around ;). Even if there was a little technical glitch with the communication system, he wouldn’t have let that stand in his way; he would’ve done whatever it took to see my mom.

Now, I’m certainly not saying that all of us should go and take up karate, kung-fu or join the army. What I am saying is: we should get some fighting spirit back into us as men. We should stand up and fight for the honour of our mothers, sisters and wives. If we don’t protect their honour then who will?

A statement I once read by Edmund Burke goes, “The only thing necessary for evil to triumph is for good men to do nothing.” If we as men don’t make a stand for righteousness then we have no right to complain about the state of the world. Jesus said, “I AM the light of the world” and “a city on a hill cannot be hidden”, let’s shine Jesus’s light to the world by making a stand.

Come on guys. Let’s get off the couch. Let’s lay off the PC. Let’s drop the phony, inflated profile. Let’s be real men in the real world.

He has told you, O man, what is good; and what does the Lord require of you but to do justice, and to love kindness, and to walk humbly with your God? – Micah 6:8 (ESV)