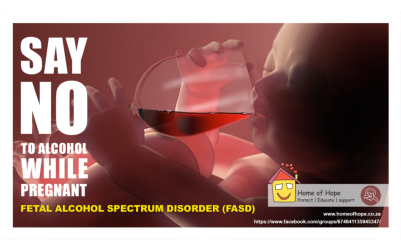 In the lead up to International FASD (Fetal Alcohol Spectrum Disorder) Day on September 9, Home of Hope, a Cape Town based child protection organisation, has launched a campaign to create awareness about FASD, and the dangers of consuming alcohol while pregnant.

During the past nine years Home of Hope has positively impacted the lives of over 400 children who have  been in the care of the organisation, and currently has 18 children in its long term care.  “We get no formal funding and rely on the grace of God, the kindness of the people and companies who support us, and our own fundraising efforts, to continue to care for these children in desperate need,” said Home of Hope CEO and Founder, Eleanor Brook.

Called to care for abandoned, abused children
She explained that nine years ago God called her to start an organisation to care for abandoned and abused babies and children. During the past nine years of this journey she realised that many of the children in the care of Home of Hope had behavioural, learning and emotional difficulties, with some of the younger children even being expelled from crèche due to their behaviour.   Through research it was recognised that these difficulties could be attributed to the children suffering from FASD in varying degrees.

FASD is a range of signs and symptoms that happen to babies who are exposed to alcohol prenatally, resulting in permanent damage to the brain of the baby.

Any amount of alcohol consumption during pregnancy is unsafe.  Some of the effects of FASD are hyperactivity, moodiness, aggressiveness, impulsiveness and learning disabilities. This disorder is both preventable and irreversible.

Since recognising that at least 70% of the children coming into the care of Home of Hope suffer from FASD, the organisation has re-directed its’ focus  to conducting intensive ongoing research into better understanding FASD , and to assist children affected with FASD  which lasts a lifetime.

85% of children with FASD in South Africa are not being raised by their parents. They are in foster care, alternative care of family or in children’s homes, and come from families that are often unstable with the child being at greater risk of physical and sexual abuse as well as neglect.

Highest FASD rate in world
The Western Cape has the highest rate of FASD in the world with about 70 000 children being born with FASD every year in South Africa.

“Our mainstream schools do not yet understand the condition nor do they have the resource to deal with it separately,” said Brooks.  When we began looking for a school to cater for the specific needs of the children in our care affected with FASD, we realised that no such school existed, and that no one was addressing their specific needs.  It was at this stage that Home of Hope made a strategic decision to learn all we could about FASD, and launched the first centre of its kind in South Africa, being our Amathemba School.”

Learning breakthroughs
“Many of the children at Amathemba centre where labelled ‘unteachable’ at mainstream  schools, and yet at Amathemba they have been able to learn to read, write, identify colors, do maths, and so much more”, said Brook.  “In addition to being loved, cared for and feeling safe, we firmly believe that every child also deserves to reach their full God-given potential, and to look forward to a more hopeful future”.

At the end of 2013 the organisation also started the MAPS(mentor and parenting support)  and Professional training programme, for professionals, carers and parents  of children who suffer with neurological challenges as a result of being exposed to alcohol or drugs prenatally.

By acknowledging that someone consumed alcohol while being pregnant, recognising that the child has some of the above issues, and also acknowledging it at an early stage, one can work with the child in a specific manner to assist the child and the parents.  Other variables can assist to lower the intensity of the challenges, such as diet and environmental factors or stimuli. Children that are left “untreated” statistically become the criminals of tomorrow, without necessarily the intent to do so. Through no fault of their own, their brains have been permanently damaged through prenatal alcohol exposure, affecting their ability to process emotions, behaviour and learning.

“We intend to grow our campaign to educate and create awareness across South Africa of the dangers of consuming alcohol while pregnant and to promote alcohol free pregnancies,” said Brook. “FASD is 100% preventable, and if we can prevent just one person from getting FASD, it would be a huge success”.   For further information please visit our website at www.homeofhope.co.za, Telephone:  021 556 3573 or email: info@homeofhope.co.za.