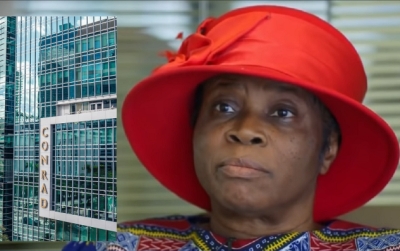 A devout Christian dishwasher and mother of six who was fired by the Conrad Hotel in Miami, Florida, for refusing to work on Sundays was awarded $21-million (R288-million) in punitive damages by a federal jury on Monday after she sued for the violation of her religious rights.

“I love God. No, I can’t [work on] Sunday because Sunday, I honour God,” Haitian immigrant Marie Jean Pierre, 60, said in an interview with NBC 6 South Florida on Wednesday.

The jury found that the Conrad Hotel retaliated against Pierre when they fired her for being unable to work on Sundays even though they were aware of her involvement with the Soldiers of Christ Church that prevented her from working on Sundays, the Miami Herald reported.

Pierre worked at the hotel from 2006 to 2016 but it wasn’t until 2015 that her boss, kitchen manager George Colon, decided she would have to work on Sundays anyway. Her co-workers traded shifts with Pierre to accommodate her religious observance but Colon demanded that she show up for her assigned shifts, and when she refused Pierre was fired on March 31, 2016.

The hotel alleged she was dismissed for misconduct, negligence and “unexcused absences,” according to the lawsuit.

Pierre responded by suing the Conrad, managed by HEI Hotels & Resorts, in the U.S. District Court for the Southern District of Florida in May 2017. The Conrad Hotel is also part of the Hilton collection.

“Defendant retaliated against Plaintiff by, among other things, creating a hostile work environment for Plaintiff, reprimanding Plaintiff for her religious beliefs, and terminating Plaintiff,” Pierre’s lawsuit said.

Pierre’s lawyer, Marc Brumer, told NBC that the hotel argued in court that it was unaware Pierre was a missionary, and never knew why she always wanted Sundays off.

Pierre alleged that in 2009, the hotel had scheduled her to work on Sundays and she informed them that if they did she would have to resign. To persuade her not to leave, however, the hotel accommodated her request until 2015.

After hearing the case, a federal jury in Miami ordered Conrad Hotel to pay Pierre $36,000 for lost wages, $500,000 for emotional anguish, and $21 million in punitive damages, the Herald said.

Although there is a cap on punitive damage awards in federal court, Brumer told NBC that he expects Pierre will receive at least $500,000 (R6.9-million).

A spokeswoman for Hilton told NBC that the group was “very disappointed by the jury’s verdict, and don’t believe that it is supported by the facts of this case or the law.”

“During Ms Pierre’s 10 years with the hotel, multiple concessions were made to accommodate her personal and religious commitments,” she said. “We intend to appeal, and demonstrate that the Conrad Miami was and remains a welcoming place for all guests and employees.”