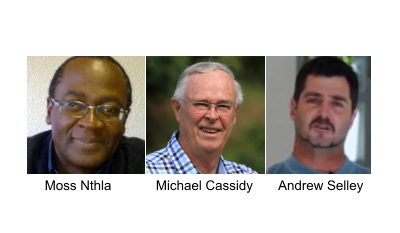 Christian leaders Michael Cassidy, Moss Ntlha and Andrew Selley have called pastors in South Africa to an urgent meeting in Johannesburg on Thursday 29 May 2014 to inform them of the escalating threat to religious freedom and the autonomy of the Church in South Africa.  At the meeting pastors will be called upon to rally behind FOR SA (Freedom of Religion South Africa) to create a powerful united voice to government on issues affecting their religious freedom.

Increasingly the South African government, in ascribing to well-meaning Conventions from the United Nations, is inadvertently proposing laws that break down the family and cross the line of religious freedom, making the State rather than the Bible the highest authority on what Christians should believe, what they may preach and how they should act according to those beliefs.  Many of these laws subscribe to a secular liberalist world-view and are in direct conflict with Christian and family values. As a result, Christians are forced to choose between obeying their conscience, beliefs or faith or obeying the law.  Failure to obey the law will result in fines or even imprisonment should they choose to obey their conscience rather than the law.

Already, in a number of cases, pastors and Christians in South Africa have come under fire for believing, preaching and living their lives according to the Bible.

In two cases already, the Equality Court and the South African Human Rights Commission (SAHRC) have found against Christian churches and/or pastors. Three more cases are pending with the Equality Court and human rights organisations against Christian churches and/or pastors, for preaching biblical scriptures that are seen to undermine secular humanist values.  Another two cases are currently pending with human rights organisations against Christian business owners, for conducting their businesses in accordance with biblical conviction and moral conscience. (For a full summary of these cases, see https://gatewaynews.co.za/if-not-us-then-who-if-not-now-then-when/).

Over the next few months, Parliament will be asked to pass a number of laws that will have the effect of muzzling Christian pastors from preaching certain scriptures and/or forcing Christians to compromise on their biblical beliefs.

In one of the first, government intends to outlaw spanking and parents who continue to do so because of their biblical convictions (based on scriptures such as Proverbs 13:24, Hebrews 12:6-7 and others) or otherwise, will be fined or imprisoned, even where no child abuse has occurred. Alternatively, parents may be forced to undergo parenting programmes that will no doubt seek to impose secular liberal values on them, and that leave no room for following their Christian convictions.

This Bill is obviously a gross interference with parental authority and family life. Good parents who discipline their children will be made criminals and will potentially have their children removed from them and placed in foster care as is already happening in Sweden and other countries.

Commenting on the disastrous consequences that Sweden’s anti-spanking law has had on children, families and society as a whole, Roby Harold-Claessen (President of the Nordic Committee for Human Rights) explains that this law has resulted in “hundreds of normal parents being harassed by the police and social authorities, prosecuted and sentenced because they have smacked their children for bad behaviour”.  (In this regard, see http://www.barnasrett.no/Artikler/smacking_and_the_law.htm).

In a recent case, the Swedish district court sentenced a Christian couple to nine months each in prison and fined them the equivalent of US$10 650 after they admitted to spanking three of their four children as a normal part of their parenting methods. The children have been remanded to state-sponsored foster care, and it is “extremely unlikely” that the children will ever be returned to their family home. This all, despite the fact that there is no indication of abuse by the parents in the released documents, with the court noting that the parents “had a loving and caring relationship with their children.” (For article, see http://www.lifesitenews.com/news/swedish-parents-jailed-for-spanking-children-seized).

Another Bill in the pipeline is the Hate Speech Bill. While Christians believe that God loves all people (heterosexual and homosexual), the Bible also tells us that He calls all people to turn from behaviour that is contrary to His divine will.

The proposed Hate Speech Bill will effectively make it a “hate crime” to preach that homosexual behaviour is contrary to the divine will, and effectively stop the church from preaching scriptures such as 1 Corinthians 6:9-11, Romans 2:26-27 and others.

Against this background, FOR SA calls Christians to unite to stop government from interfering with their constitutional freedom of religion and the autonomy of the church.

Andrew Selley, Founder and CEO of FOR SA, said that while Christians may disagree with each other on certain doctrines and interpretation of Scripture, they can agree on this: it is not for the government to say what they may or may not believe. That privilege belongs to God alone, who is the highest authority of all people and to whom all people (including those in authority) shall give an account according to 2 Corinthians 5:10 and other scriptures.

For more information about FOR SA, see www.forsa.org.za