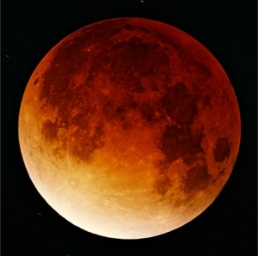 Christians worldwide are divided over the significance of four upcoming ‘blood moon’ lunar eclipses, namely whether or not the celestial events mark the fulfillment of end times biblical prophecies.

During the wee hours of Tuesday morning, the full moon will pass through the Earth’s shadow, causing a total lunar eclipse. The eclipse will be visible from many locations, including all of North and South America.

According to EarthSky, the total eclipse will be visible from about 2:00–3:30 a.m. Central Daylight Time. Though the moon’s color during the eclipse is difficult to predict, the moon might turn an orange or red hue.

The eclipse will be the first of four upcoming total lunar eclipses. Series of four lunar eclipses, known as “tetrads,” are relatively rare, according to astronomers.

Several Christian leaders have suggested that the upcoming lunar eclipses are scripturally significant and will possibly fulfill prophecies found in the Bible.

“The sun shall be turned into darkness, and the moon into blood, before the great and the terrible day of the Lord come,” Joel 2:31 states.

Connect with Christian News
“And I beheld when he had opened the sixth seal, and, lo, there was a great earthquake; and the sun became black as sackcloth of hair, and the moon became as blood; And the stars of heaven fell unto the earth,” says Revelation 6:12-13.

“We are on the verge of witnessing something historic,” Mark Biltz of El Shaddai Ministries in Bonnie Lake, Washington and author of Blood Moons: Decoding the Imminent Heavenly Signs, told WND.com. “This has happened only eight times over the last 2,000 years! And the last two times these occurred on the Jewish holidays there was a war in the Middle East regarding the nation of Israel. These are patterns and historical facts that cannot be disregarded.”

John Hagee, author of Four Blood Moons: Something is About to Change, has also been particularly vocal about the significance of the blood moon. He states that that the four lunar eclipses suggest that God is sending a sign that significant changes are ahead.

“Every time this has happened in the last 500 years, it has coincided with tragedy for the Jewish people followed by triumph,” he remarked to the Daily Express. “And once again, for Israel, the timing of this tetrad is remarkable.”

“[T]here are specific references that focus on the moon looking ‘blood red’ in the lead up to the great and terrible Day of the Lord and it is for this reason that the prophecy of the blood moon tetrads is causing a ripple across the Bible community,” writes Kade Hawkins of Prophesy News Watch and Signsofthebloodmoon.com.

Hawkins has released a four-part report and critique about blood moons and their significance.

But Dr. Jason Lisle, an astrophysicist with the Institute for Creation Research, told Christian News Network that eclipses are “actually quite common.”

“In the 21st century,” Lisle said, “we will experience 85 total lunar eclipses, including the eleven that have already happened. A ‘tetrad’ is a sequence of four consecutive lunar eclipses separated by six months each. Tetrads are not all that unusual. The 21st century will experience 8 tetrads. So it is statistically inevitable that some of them will occur on dates of interest.”

Lisle further stated that lunar eclipses regularly coincide with Jewish holidays, since the Jewish calendar is based on the lunar cycle. Being surprised by an eclipse’s occurrence on a Jewish holiday, says Lisle, “would be a bit like being surprised that Thanksgiving falls on a Thursday for the next ten years in a row.”

He said that he does not believe that Tuesday’s blood moon necessarily signals the return of Christ.

“[T]he timing of the second coming of the Lord cannot be predicted in advance (Matthew 24:36),” Lisle noted. “But lunar eclipses can be predicted centuries in advance. So it should be clear that these are two unrelated events.”

“A lunar eclipse is a delightful event, and one that anyone can observe,” he stated. “We are able to predict such events only because God upholds the universe in such a rigorously consistent and mathematical way. So we should enjoy the beauty of these lunar eclipses and thank the Lord for His gracious provision to us.”