Over the course of two days we’ve attended a Thanksgiving Celebration in Mamelodi contrasted by a Carols Service in Bryanston New Covenant and punctuated by the launch of Andrew Christie’s book Becoming.

The common thread in all three of these but very different gatherings was a sound of a similar heartbeat. It was a sound of peoples whose identity was no longer found in the traditions of man but in the heart of our Saviour, Christ our King.

Fire revival — Mamelodi
How do you lead a flock of multigenerational, multicultural and multi ethnical people and bring them to know Christ as Saviour and Lord of All in what was once an area proclaimed to be the training area for false gods? In looking back over Fire Revival Community Church’s history, here are some of their pointers:

You raise up the standard in the name of the Lord of Hosts and call the place Fire Revival and prophesy revival into the heavenlies and to everyone.

You teach the word of the Lord in an uncompromising manner and lay Biblical foundations that cannot be shaken.

You allow the Holy Spirit to have His way with signs and wonders according to the Word and you raise up a generation of ground shifting heaven shaking youth. The women roar like lions in the face of any adversity and their mountains tremble and shake.

Multiplication and increase is part of their creed and no one, no, no one has dire need.

You embrace all generations and cultures and soon and very soon they will burst through the doors and increase in numbers will lead to new stores.

Influence and wisdom is theirs to give, not just in their corner but for many a foreigner and dignitary.

So to give honour where honour was due, they celebrated for a four hour stretch in a multicultural thanksgiving celebration in song and dance. From the youngest to the eldest they testified to the goodness of the Lord. A portrait of unity in Christ at the table of celebration unfolded as to the possibility of a unified revived beautiful South Africa.

Dance like a child — NCCB
As we sang some of the well-known and some modernised carols at NCCB my eye fell on a charming young child who came dressed in her princess skirt to witness the celebrations. She stepped into the isle and begun dancing unashamedly. Spinning round and round to the strains of the worship music till she almost toppled over with glee. I felt the Father’s joy watching her childlike innocence. Seeing her entering the Kingdom like a child with such abandonment and not considering the opinions of those around was heart-warming and for a split second I could see what Father sees. Then my eyes fell upon a grandmother who was way passed caring what others thought as she sat with arms raised heavenward and it seemed that she had heard the angels sing. At the end of the celebration I stopped to share a word with her, her heart was so filled with the love of the Lord — with dewy eyes she said she could only imagine what heaven will be like singing with choirs of angels.

Blessed are your eyes because they see, and your ears because they hear, For truly I tell you, many prophets and righteous men longed to see what you see but did not see it and to hear but did not hear it … (Mathew 13:16) 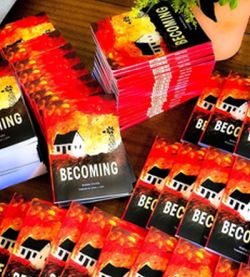 Becoming
Surrounded by family and friends Andrew Christie sketched some of the reasons why he wrote the book Becoming. It’s the essence of a man, himself, who had searched high and low for real meaning in life. He writes the book like a puzzle, just when you think you have the answer, there’s just a little more insight in the next chapter. He doesn’t presume to know all the answers to life; he invites you to find the answers with Christ as you journey with him. He’s real and honest but just enough to never let all the guts and gore stop with him. He has wrestled hard with the Lord for revelation and gives it graciously for you to consider owning and finding it as yours. After chatting to his mother about the call on Andrew’s life and then reading his life’s story, it’s so intentionally interwoven with the reality of the living word of God. I could understand why there was fire shut up in his bones to see revival in this nation. He’s pretty radical and he’s just perfect for such a time as this.

I love you, My child
If ever there is a word from the Lord that carries a simple, but profound childlike message that must be shared again and again it’s this one:

The Lord would say, “I have such a love for you My child, that I would move heaven and earth for you.”

If you trust Me, I promise that heaven will come into your heart when you need it. But you would say to Me, ‘Lord, it’s been such a wilderness. It’s been so long.’ But I, the Lord, say to you, you ought to know what I’m going to do. I will do it suddenly!”

“Where from one day to the next it seems as if you cannot hear Me, you don’t know what to do,” but the Lord says, “I will come and do what you asked because the Lord says you will have your suddenly.”

To all our readers, may the reality of Christ our Saviour, be found in your hearts over this Christmas period.