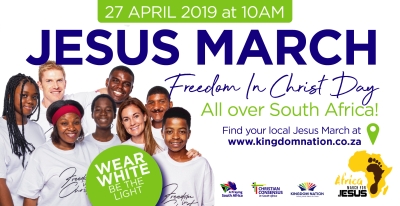 Christians dressed in white will be marching for Jesus in towns and cities throughout South Africa on Saturday — and uniting in prayer for the nation from 10am to 10.10am.

Participants in the “True Freedom Day Jesus Marches” have been requested to bring charged cellphones so that they can tune in to the prayer feed which will be available on the following Facebook pages: Dr Arthur Frost, Arno van Niekerk, Kingdom Nation and Consensus SA.

A number of radio stations will also be broadcasting the nationwide prayer which will begin as marchers around the country set off, says Dr Frost, a Bible teacher who coordinates a prayer movement linked to the Kingdom Nation movement which is coordinating the marches.

The united prayer of many believers will result in the 27th of April becoming a defining moment for SA, he says.

“This nation can be born in a day as the Christians start taking control of the spiritual environment.”

Saturday’s march locations and logistical information about the marches around the country are being published on the Kingdom Nation website (www.kingdomnation.co.za), which is also where march organisers are asked to register their events.

At Mount Zion, Germiston, the Jesus March will be preceded from 9am by a live-streamed mass meeting in the auditorium, where Heinz Winkler will be leading worship. Some of the bigger centres will have more than one march on Saturday. For example, there will be three marches in Pretoria.

PE marching on Sunday
In Port Elizabeth, the march will be on Sunday afternoon, as the municipality only allows one march a day and the DA have already booked Saturday. But PE Christians are invited to gather at Word of Faith Christian Centre from 9.30am on Saturday to watch the pre-march event at Mount Zion and join in the united national prayer event at 10am. More info about the PE programme, including a 24-hour Election Worship gathering on May 7 and 8 hosted by Burn 24-7 is available on the Facebook event page at https://web.facebook.com/events/2125247094366851/

Daryl Hardy, of Kingdom Nation, says: “We are calling all Christians to be bold for and visible for Jesus by wearing white on the 27th April (Saturday) and 8th May (Election day) — and on all public holidays in the new chapter of creative restoration of our nation.”

He said that the Scripture that inspired the nationwide Jesus March campaign is Revelation 7:9 that speaks of a great multitude in white robes — After this I looked, and there before me was a great multitude that no one could count, from every nation, tribe, people and language, standing before the throne and before the Lamb. They were wearing white robes and were holding palm branches in their hands.

He said that by wearing white during the march Christians would also be proclaiming their desire to establish righteousness in all sectors of society.

He said political emblems should not be displayed during the marches as the focus was on lifting Jesus.

He said marchers were also being asked to bring black bags to serve the community by cleaning the approximately 3.5km routes as they walk and pray.

“Churches and people from all walks of life are phoning and saying: ‘We want to be bold for Jesus and march on the day.’ We are seeing no boundaries of gender, race or denomination. I think the purpose and the purity of the march is prevailing,” said Hardy.

He said Christians were standing up and catching the vision of the Kingdom Nation movement’s vision to unite South Africans in Christ to build a Kingdom nation of love, service and justice — and its call on believers to vote for any Christian party on May 8. A voter information chart is available on the Kingdom Nation website (www.kingdomnation.co.za) to assist voters in making their choices.