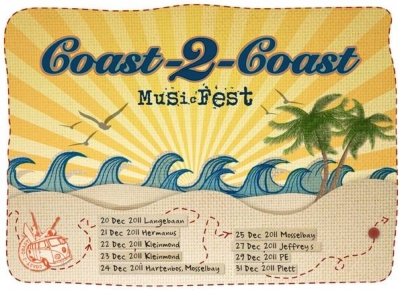 A wave of top-class holiday entertainment will sweep from Langebaan on the west coast to Port Elizabeth on the east coast in the 10-day Coast-2-Coast Music Fest which starts next week.

About 100 people, including bands artists and support crew are participating in this  lively holiday entertainment tour.

The tour schedule is:

Details of the tour events, which may vary slightly from venue to venue, will be advertised on radio, in print media and social media. Further information is available from the tour coordinator Richard Wade at 083 225 8529 / richard@coasttocoast.org.za.

The music fest will provide people in the coastal towns an opportunity to experience notable contemporary worship group Shofarband, who recently released their first live album, Victorious One, which follows their first studio album, Worship As One. Shofarband is made up of musicians from the various Shofar Christian churches in South Africa and abroad. Upbeat Akrikaans acoustic band, Kaleidoskoop will also be a special treat for holidaymakers.