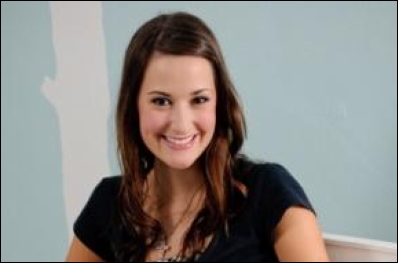 Twenty-two year old Courtney Jonas has recently signed up with Integrity Africa and is currently a co-presenter on iShine Southern Starz. An extension and South African version of America’s popular and ever-growing “tween” ministry, this new television program which premiered on DSTV’s One Gospel on Saturday June 4, is a positive media alternative for young children.

iShine Southern Starz is Courtney’s first Integrity Africa project, and, along with co-presenter Connell Cruise and other new young Integrity signed artist, Shanna, this trio will perform to and reach youth around South Africa.

Born and bred in Welgemoed, Cape Town, Courtney decided from the tender age of nine years old that she wanted to be a singer.

“I’ve wanted to be a Gospel recording artist for many years”, shares Courtney. “My mom has always been my biggest supporter and my older sister is also very supportive. I was persistent; as I believe that if you do your part, God will do the rest”.

No stranger at all to the world of music and performance, Courtney is a versatile and interesting young woman – a singer, dancer, actress and songwriter – with many achievements to her name. When she was younger, Courtney did ballet, modern, tap, hip hop and jazz dancing. She also began ice-skating at the age of six, and represented South Africa for this sport. However, music has always been the main focus in Courtney’s life. “I was always very serious about anything to do with my career”, she explains.

Courtney has been playing the keyboard since she was 12 and enjoys composing her own arrangements. “I prefer to play by ear, adding in a few of my own twirls”, she says. Courtney has rubbed shoulders with local artists Patricia Lewis and Tommy Dell, and was selected to represent South Africa at the World Championships of Performing Arts in Los Angeles for singing, dancing and keyboard for three consecutive years, starting in 2006.

Courtney graduated in musical theatre and dance from the Waterfront Theatre College in 2008, and immediately auditioned for South Africa’s reality TV show, High School Musical: Spotlight SA. She made it to the top seven girls, and was then offered the role of understudy of the female lead, Gabriella Montez, for the stage production of High School Musical: Live on Stage. This was her first professional acting and singing role, and Courtney was able to tour, along with the cast, throughout South Africa in 2008/2009 and overseas to Shanghai, China in 2009.

“Being in a stage production teaches you so much discipline”, Courtney says. Despite performing eight shows a week, she thoroughly enjoyed this experience.

Courtney was also involved in the South African production of EVITA The Musical, in which she played Evita’s sister and was also part of the ensemble. Finishing in April 2011, this show ran for almost a year, due to popular demand and sold-out shows, and won seven Naledi Awards.

“This was a serious, mature role, and I am glad I was challenged to grow in maturity in it”, says Courtney.

In 2009, Courtney won the solo vocal category for the Jubilate Gospel Competition, and began to work on her own original material, as well as recording a Gospel song that has been released on two compilation albums.

Courtney classifies her music as pop/rock/classical. “I like adding strings and classical instruments, such as the piano”, she says. In mid-August 2011, an iShine compilation album which Courtney worked on will be released, and this will be promoted in July and August. Her debut song for iShine, entitled First Love, which she sang on SABC 3’s breakfast show, Expresso, on June 8, appears on this album.

Courtney is set to release her first solo album in early 2012. Not yet named, this album will  comprise 12 songs; some of her own and others which have inspired her.

“This album is made up of six of my own compositions”, shares Courtney. “There are a few covers – ones which I feel close to and I relate to”. This album will be launched in South Africa, but Courtney definitely hopes for it to become international, digitally through iTunes, and would like to tour and perform overseas as well.

Now signed to Integrity Media, Courtney’s ongoing persistence has been richly rewarded in her amazing opportunity of being used as the face of iShine. Courtney and the crew began filming iShine Southern Starz a few weeks ago in Johannesburg, and after many hours of intense work in just three days, all 13 episodes were completed.

“They are incredible people”, says Courtney of 23-year old Connell and 14-year old Shanna, the other two Integrity artist signings. “Connell is so funny – we have a good on-screen chemistry, and Shanna is so cute and very talented for her young age”.

Each week, iShine Southern Starz covers different relevant topics for teens, such as gossip, modesty and peer pressure. “Connell and I each get a week when we are the guest artists and get to perform”, explains Courtney. “For the first half hour of the show, we cross over to iShine KNECT in America and discuss the topic with them. Then we cross back to our studio and interview our guest and discuss more on our side.

“I’m learning so much from iShine, it’s incredible! Not only is it great for children to get advice from a person on TV in a way that that they can relate to, but there is Biblical insight and it’s also a good way to draw closer to God and make life easier. Our aim is to enrich them, to encourage them to turn to God, because [He’s] the only way”.

Courtney has done very well to have achieved so much at such a young age, and the future is looking brighter still. She leads such a full and busy life, yet always prioritises and makes time for music. “I don’t see it as a chore; I am passionate about music”, she enthuses, “I compose on my keyboard and always go back to music, and work on it whenever I can. I don’t believe in stopping.”

The Scripture verse Courtney lives her life by is Philippians 4 verse  13: I can do all things through Him who gives me strength. “Through His strength, you are capable of accomplishing anything you put your heart to”, she declares. And with such a positive outlook, Courtney is sure to continue to shine!