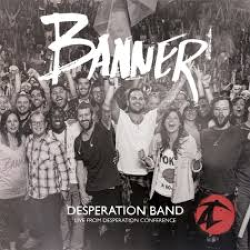 I love it when a group of musicians are so confident in their own ability and comfortable in their own skin, that they are not afraid to share a stage with other musicians for a common purpose, to worship the One and Only God of the Universe.

DESPERATION BAND has been going strong since 2001 and is part of the worship ministry of New Life Church in Colorado Springs, Colorado. It all started when the three founders of the band, Jon Egan, Jaren Anderson and Glenn Packiam, where challenged by their pastor, David Perkins, to play together at the first Desperation Conference. This conference is held annually in June/July and has its main focus to draw college and high school students into a deeper relationship with God, almost spreading a contagious “Desperation” for Him!

My path crossed with Desperation Band as it where, for the first time when I received the book called Butterfly in Brazil, written by Glen Packiam, as a gift. This book and his insights impacted me so much and placed Desperation Band high on my list of favorites.

The band’s latest offering was recorded live at the July 2014 Desperation Conference and is called “BANNER”. To quote John Egan: “We want to make sure we’re singing songs that help young people understand they are in a moment of time but that the church has existed for thousands of years. We want to place an emphasis on history, returning to the sacred call to worship… It’s so important for them to understand they are part of a deep-rooted history of Christians who have survived. We love doing new songs, but we are very careful that we are not developing new ideas but celebrating the ideas that have always been true.” Spoken like a true ‘seasoned-worshipper’ understanding the role they as leaders are portraying to a younger generation following in their footsteps as they too pursue the call to worship…

Lovely seeing names like Kari Jobe on this album, thus my first comment. A few of my personal favorites on this 12-track album is definitely FUN, MAKE A WAY, ON THE THRONE and CLOSER TO YOUR HEART.

May we too be ‘infected’ by this contagious “Desperation”, desperation for more of God not only in our churches, but in our homes and in our streets?