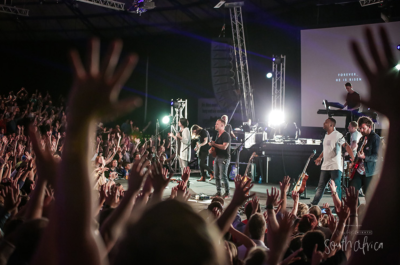 Less than a month ago a sound over South Africa was “Do not be afraid — revival is in the land!” We remember standing worshipping with 7 000 other South Africans in what was an almost a surreal setting. We were afraid, not at war! But we were clearly being given a prophetic warning and being prepared for something…..

The Bethel Music prophets were encouraging us not to be afraid of what the enemy was about to unleash in our land. Revival was imminent in our land. At that time we had no idea what form the battle would take. Looking around, to see who our fellow watchmen on the walls were, it was like what Joel the prophet said: “In the last days we would be young and old, we would dream impossible dreams, we would prophesy into situations. And there we were, our hands raised high, silver tears streaming down our cheeks and we sang: “Our Father who art in Heaven, hallowed be Thy name, thy Kingdom come, Thy will be done, on earth as it is in Heaven”  The ground shook and we sang it again.  Come Father come heal our land.” It was electrifying. We wanted the moment to last forever. Little did we know what lay ahead…

Prophesy into the atmosphere daily
How powerful is the tongue – the power of a king’s words (whether correctly interpreted or not) played a part in unleashing horror in our streets just weeks later. We will not regurgitate the horrors of the past weeks but we want to strongly urge you to take up your swords of the Spirit and begin to make war in the Heavenlies. Our King of all Kings urges us to prophesy into the atmosphere daily. Speak the very opposite of what is being declared as destruction.

“Whatever is true and whatever is honourable and whatever is right, and whatever is lovely, whatever is of good repute and if there is any  excellence and anything worthy of praise, dwell on these things.”  — Phil 4:8. We as Christians are given the mandate to prophesy, which is to encourage, build, declare, give hope and a future for our fellow South Africans and Africans alike.

We are a  nation of overcomers – we are resilient and God has made us to be just that. It is in our blood to fight, but let’s fight for the right reasons.

We have met with a company of prophets from Central Parks Church, been in communication with senior leaders of churches and have compiled a prophetic voice of what’s on the heart of the Lord for the nation at this most critical time…

Our words are vital
The overall leading is that we should not fall into slumber or sleep, but be watchful for the times we live in are critical indeed. The voice of God’s people must become a collective one – each person‘s words are to be counted – the flippancy of one’s words bantered on social media is weighted in the Heavenlies. The pen is mightier than the sword.

“Out of your mouth comes life and death, therefore choose life.” We are called to co-create with our words, to partner with the word of God and speak life over our nation. To speak life, love, forgiveness, a future and words of reconciliation. We are encouraged to urgently lay aside foolish things and press on to the high calling and if we are to take up a fight let us fight for salvations, let us fight for the Word of the Lord to be spread in this time.

Brothers and sisters, come press in like never before. we urge you that your words will  resound.  The dreams you will dream will be the dreams of souls turning to the Lord, of souls repenting, of blind eyes opening, of deaf ears hearing. Begin to cry out for the dreams of the Lord, begin to ask the Lord for His heart, His heart of courage, His prophetic words for men and women and children — He will give it to you supernaturally — now is the time. His grace will be found.

Words from others
Ron Burhoff (USA) at St Martin’s Church Bergvliet, Cape Town, gave an encouraging prophetic word:  “ The land in South Africa will be healed – we on are on the verge.”   He also saw an open vision of angels sweeping the land and an abundance of rain. and a crystal clear river flowing and God began healing families. Corruption came to an end.  The responsibility we had as a people to this was not to partner with fear and unbelief that God could do the impossible. That the Lord of the harvest was more than capable of turning our impossible situation around. (Read full Ron Burhoff report)

A Cape Town reader sent this dream with an urgent appeal — Last night I found myself  awake but not awake……….I was preaching. The anointing was very strong and I found myself sharing the Gospel with an authority and clarity that amazed me. The most important aspect of the message was that as Christians we have lost power and are like smoldering coals. We need to be born again and baptised in Holy Spirit Fire……Revival Fire. I was preaching the Gospel of Jesus Christ calling those in the church to come forward to be baptised in Revival Fire, Holy Spirit Fire. To be baptised in the Holy Spirit with the evidence of praying in other tongues. We could not remain so impotent when Christ had given His all for us and the promised gift of the Holy Spirit has been given. We are crying for revival but in many churches the message of God’s glorious empowering by the Baptism of His Holy Spirit is being neglected and as a result the church remains powerless. Christians lack the power, the desire, the ability to GO and therefore many do not share their faith with those outside who are lost and hurting. Their faith or belief  is not real even to themselves and as a result the ability to witness is weak. I felt such a need to say to pastors “Preach Holy Spirit Revival Power. Preach the Baptism in the Holy Spirit and see the Body so filled with the glorious power of God that they cannot remain the same. That they cannot contain the joy of what they have received and will become fearless in proclaiming the Gospel”.

A prophetic word given by intercessors of Randy Clark, Global Awakening Ministries, USA (via Ruach Ministries):
Your hour of deliverance is nigh
For the Lord has called you to be a mighty sheep nation.
A nation of justice and truth.
A people who know the voice of the Shepherd.
Those who follow His will.
Those who go where His path leads.
Those who lead others to green pastures and still waters.
Arise Beautiful Bride, South Africa.
For the Lord has called you to feed the nations from His abundance.
He has called you to take the homeless poor into your heart.>He has chosen you to love and feed the masses, for He has blessed you to be a blessing.
You are a Joseph Storehouse South Africa.
The Lord is releasing wisdom to you. This wisdom brings regional transformation.
Winds of Hope are bringing change.
Angelic might and power is being released to you.
Seek to know My Name, says the Lord, for I will come to you. I will fill you so you will overflow. You are to be an outpouring of hope and grace. Remember to always seek My face. To seek My kingdom first. Everything you need will come from Me.
Seek My righteousness and I will clothe you in my grace gifts and power.
Humble yourself and I will come to you.
My promises to you are faithful and true.
I have called you be my bread-basket and to be a people of living hope to all of Africa.
It’s not just about those who take, but to arise and be those who give and give and give that you might live in the abundance of My life.
I am the plumb line aligning you.
I am the tuning fork fine-tuning you.
I am the fire in this revival that is blowing across this land.
The movement of My heart is this awakening.
Don’t quench the fire.
I am bringing healing and salvation.