A monthly Christian sport column by Cobus Kruger, a professional triathlete who is passionate about evangelism, leadership and community development through sport. 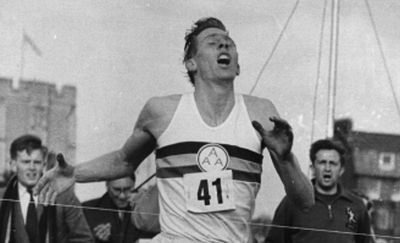 Roger Bannister is a legendary track athlete of the late 1940s and ealy 1950s who will always be remembered for doing the “impossible.”

When the 1952 Olympics came Bannister was well established in the 1 500m in Great Britain. Everyone expected him to win, but at the last minute, the racing schedule was changed, disrupting his resting routine and he came in fourth.

As to be expected, he was disappointed. He took a two month break after the Olympics, using the time to decide whether he wanted to keep on running.

He decided to continue running and to go big by doing the so-called impossible.

On May 6 1954 BanNister and some other top athletes were scheduled to try and run the mile under four minutes. The weather conditions on that day were not good at all. It was raining and there was a strong wind.

Landy, one of his fellow competitors who had already tried to break the four minute mile mark, was already on his way to Finland for his next shot – in supposed ideal conditions.

But Roger Bannister stuck to his goal of pursuing the impossible on the evening of May 6 1954.

He believed in himself and his coach apparently told him just before the race that he believed that, despite the adverse weather conditions, Bannister had what it took to break the four minute barrier.

Strengthened by belief
Bannister went into that race with strong self-belief and bolstered by his coach’s belief in him. And on that historic evening in athletics history he achieved what he set out to do — he broke the world record and became the first man ever to run a sub four minute mile.

He was just an ordinary boy. There was no reason why he should have gone on to do anything great. He was just a boy from a working class background who went on to study medicine.

But Bannister decided to change things.

He refused to settle for the limits imposed by others.

When no one believed his goals were possible – he continued to believe. When he failed publicly, he picked himself up, and carried on. When his competitors were hot on his heels, he picked up his pace.

He took things into his own hands, and decided to tell a better story. And in doing so, he did the impossible. He made history!

Freed from death
This remarkable story of a man who believed in himself and had the belief of his coach on race day despite unfavourable race conditions, and went on to achieve the so-called impossible, reminds me of another great, true story. The story of our God who sent Jesus, His son to earth to die on a cross and do the so-called impossible of rising from death, so that we as human beings that accept Him as our Saviour and believe in Him could be freed from death and have everlasting life. Wow!

God believed in us, just as Bannister’s coach believed in him on the evening when he went after his so-called impossible goal.

It is the story of Easter, of God sending Himself, Jesus, to  die on a cross for us, his beloved people, because He believes in us. Now we can walk in freedom and love in this world, bringing God’s kingdom, changing the world and making history, even though our world’s condition makes this seem like an impossible task.