ACDP stalwart Jill Stoll reflects on her unlikely entry into politics after she asked God a question at the dawn of SA’s democracy — and shares her views on the present era.

Sometime before the 1994 elections I asked the Lord: “What am I going to do, there is not a party I can vote for?”

Previously I had been given a letter informing me of the formation of a Christian political party, called The African Christian Democratic Party, but had not read it.

I was not interested in politics and had been seriously advised that anyone who went into politics would become corrupt. I did not want that either.

But God had heard my prayer and it set in motion a number of events in my life.

The gentleman who had given me the letter phoned me and was rather downcast that this party had been started so late.

Only the Holy Spirit could have replied with these words, which I spoke: “Don’t worry, you know what God is like. He often works in the 11th hour, maybe the eleventh and three quarter hour.” 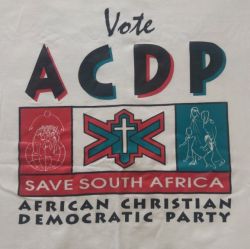 I think he was so encouraged at my answer that he asked me to attend this Christian party’s meeting in Bishops Court and hear the three men who would be speaking.

Of course, as a good Christian, I went with a determined mind to suss this out.

I said to myself, don’t open your mouth for you are totally out of your depth in this situation.

But God, confirmed to me as they spoke that this was of Him. What they said connected with what I had learned and what I had felt. I went away totally convinced that this party was God’s answer to my question.

The next thing my neighbour asked me if I would host the first house meeting for the party, as her house was not big enough. I said yes!

To this day I do not know how many people came and filled every area of our lounge, veranda, entrance and passage. But they came and they heard. Then I expect they went out like disciples of the living God and told others the good news.

Entering the world of politics
My friends and I arranged public meetings where the leader would speak and challenge people.

We spread the good news far and wide. We did our best.

My husband and I delivered posters up the Garden Route to people who were standing in their area and met them, some of whom God had sent to that particular area for His purpose.

I was pleased to attend the party’s first National Convention in Johannesburg in the World Trade Centre.

When we were asked to stand together as our leader prayed to Almighty God, the presence of the Holy Spirit came down like a blanket on us all. Incredible!

I had never experienced and felt the heavy weight of God’s presence as I did then and I have never felt it since.

God was pleased we had come.

I was also willing to stand publicly for the party and went through the candidate process. 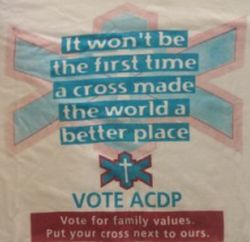 Then, I heard that the pre-election office was in great need of volunteers. So I volunteered from about 8.30am to 4.30pm each day.

We sat at the front desk in the reception area greeting people and answering the telephone.

We photocopied the information available and kept the coffee table well stocked as people were coming in from far and wide to collect information to take back to their own areas.

What a prayerful, wonderful, exciting, busy and challenging time. God’s people working together for a common cause.

Make no mistake the fruit of some showed they were only there for self.

Then I had the great privilege of sitting with the other volunteers and the leaders in front of the television waiting for the results of the voting.

O happy day! We received two men in the national parliament and one in the provincial parliament.

And most significant of all was that they were black, brown and white! A true reflection of our nation.

Of course, this was for the Christians involved, uncharted ground. Mistakes were made and apologies needed to be given. Tough lessons needed to be learned and wisdom needed to be our number one teacher.

Under His hand we all went to the polls in peace.

We voted our decision.

SA was saved from what the world thought would be a bloodbath.

The world called it a miracle! It most certainly was, thanks be to our faithful God.

I do believe that if we Christians stood together in unity, with one aim and one goal, our country could be born in a day.

In politics the number of votes is crucial.

If we want our country to once again honour the Lord, then we must have God-fearing people in the place of power. 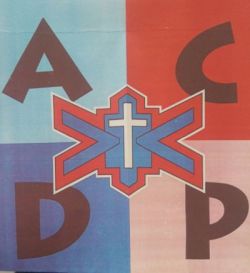 For this to happen we must be of one mind, one conviction, one goal and one political party.

It is vitally important who rules our nation for we will have to live under their rules.

To not honour God is to put ourselves against Him.

If ever the Church needed to be of one mind it is now!

Unity brings God’s blessing and empowering and His victory.

Church in SA, wake up! It is God’s way or his judgement.

Think of your children and their children! SA is at a place where parents cannot protect, discipline or teach a godly lifestyle to their children. Our Father is not happy with this state of affairs.

We must come together to protect and preserve the values we cherish most. We must stand as one.

I believe that what God has started He will bring into being. As always in scripture, the “BUT IF” is so very important.

The day of compromise is over. A foot in one camp, and the other foot in another camp is double-minded.

There is only one way and that is always God’s way, one narrow road leading us into the purposes of our Almighty God.

After receiving Jill Stoll’s above reflections on her political beginnings, Gateway News asked her to send us an update on her life up to the present. This is what she wrote:

We moved from Fish Hoek in September last year. I stood for the ACDP in the provincial elections there in 2017.

At this time we are living in Pinelands Place and have been here a year now. We are in our seventies.

Hubert had his right leg amputated in July this year but thanks to the prayers of God’s faithful people we have come through on a straight line, knowing that God was with us. He has healed well and is looking fit.

I help in the garden here and love the outdoors. I am not actively involved at the moment but being an intercessor I attend the prayer group that regularly prays in the provincial legislature and in the council chambers.

Hubert and I have a quiet time every morning and love the Word.

I truly believe that the ACDP is a road we Christians can walk on, as we cast our vote as every citizen of South Africa should do.

Every vote is so important and can mean the difference between a good government or an incompetent one.

Further, I believe that it is a test of faith for us who call ourselves Christians, knowing that God so often uses what we think is impossible to show the world that He is the only God of the possible.

I also believe that the day of compromise is over.

In this election it will be most important that Christians inform themselves of what the party stands for in its manifesto.

Many of the parties now are deliberately going against what the Bible teaches us. As a Christian, I know that this is totally unacceptable to Almighty God.

If we choose to go the world’s way, we put ourselves in direct conflict with the very God we say we serve. This should not be so!

From Philippians 1:27-28 — Now, the important thing is that your way of life should be as the gospel of Christ requires, so that, whether or not I am able to go and see you, I will hear that you are standing firm with one common purpose and that with only one desire you are fighting together for the faith of the gospel. Don’t be afraid of your enemies; always be courageous, and this will prove to them that they will lose and that you will win, because IT IS GOD WHO GIVES YOU THE VICTORY.

If all the Christians could stand together in unity, and Almighty God commands His blessing, and with one goal in sight, that being a country that once again honours God, I believe the next revival will be called HOPE RENEWED!