A call for you to rise up into a new way of being and living with God.

This month we have a special article written by Prophet Zion Matthew for the upcoming tour he is hosting with Ryan LeStrange for GLORYFEST 2017. The tour dates are all at the end of the article. 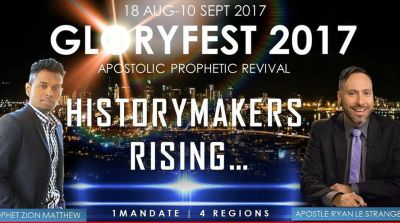 His glory, our burning hearts
All over the Earth there is a remnant that the Lord has raised up whose hearts beat to see His glory sweep through the Earth and who have laid down their lives to see a fresh revival break out in the nations.

From the days of Martin Luther, who brought the first reformation, to great men and women of God who pioneered great revivals and reformation in the earth, there have been those that believed that there is a coming move of God greater than the Day of Pentecost that will usher the earth into a wave of the greatest Outpouring of the Holy Spirit that has ever been recorded.

In this move, nations will bow their knees, governments will surrender their will to the lordship of Jesus, and stadiums be will filled with people hungry for Jesus. Church services will exit buildings and impact the marketplace. Our youth will be so on fire with the Holy Ghost that they will bring transformation in schools and universities. The church will become a voice, rather than an echo.

The cry of Jesus in John 17 was for His Church to come into fullness and for us to share in the same glory that He walked in here on earth. I believe that time has come. We have reached a tipping point in the Spirit and the Lord is about to activate His church into it’s true prophetic mandate.

The catalyst for change has always been those that are not satisfied with ordinary mundane “church as usual”, and I believe that the Lord is priming us for something that no eye has seen and something that we have never heard of before. The Lord has declared through the mouths of His prophets that South Africa will spearhead Africa’s spiritual Renaissance.

Prayer, fasting, contending for it and unity in the body of Christ are the keys to see this happen in our day. The Lord birthed the vision for GloryFest, a national Outpouring of the Holy Spirit, so that those who are hungry for Heaven to invade the Earth can come together to contend and strategise and prepare for the coming days.

Birthed in 2016, every province was represented at these gatherings that launched in Tongaat, KwaZulu Natal, (four years ago a massive revival of global significance broke out and was covered globally by GodTV).

GloryFest has quickly gained momentum and spread to Cape Town where the move of God was taken to a whole other level.

Our keynote speaker Apostle Ryan LeStrange from the USA is a prophetic apostolic voice to our generation and a revivalist who flows in miracles, signs and wonders. Thousands of people who attended GloryFest last year were deeply blessed by his ministry.

GloryFest 2017 has increased it’s reach into four regions for 2017 — Isipingo, Pietermaritzburg, Phoenix and Cape Town. We have seen over 100 churches in these regions come on board to help birth this great mandate of the glory in South Africa.

GloryFest is cutting across the racial divide, it is multi-generational and multi-cultural, and everyone that is on board has only one goal…. We want God to pour out His glory and power again.

It’s for the Queen Esthers who will rise up and contend on behalf of their nation.

It’s for the Nehemiahs who will rise up and rebuild the broken down walls of the cities.

It’s for the Elijahs that will call down God’s holy fire on the Earth.

This call is to you!

Are you hungry for the greatest move of God?

Do you want to see the supernatural power of God manifest in and through your life?

Come and be activated in the Glory.

FOR BOOKINGS Please Contact Zion Matthew Ministries:
admin@zionmatthew.org
078 496 1321
Alternatively phone the number given for each area in the schedule below:

Other Events at Tabernacle of the Congregation:
Youth Outpouring
Dates and Times: 18 August 6:30pm
School of the Supernatural – School of Ministry
Dates and Times: 26 August 10:30am.
Registration Fee: R120 (refreshments and notes provided)
This is for pastors, leaders, anyone that wants to take their ministry to the next level.

Let’s come together and birth Gods dream for our nation.