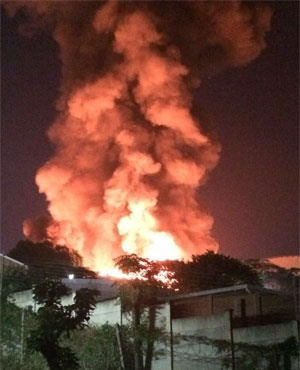 “We will be meeting today to talk about the damage and how much it will cost, and how long it will take to rebuild the structure,” Pastor Llewellyn Roberts, 58, the son of founding Pastor Fred Roberts, told News24 today (Wednesday June 8 2016).

He said his 84 year-old father was devastated.

“But we believe that all things work together for the good for those who love the Lord,” he said.

The cause of the fire, which started around 18:00, was still unclear.

Paramedics said a police officer, who was attempting to direct traffic at the church, was knocked down during the fire. He was in a stable condition.

Roberts, who heads the DCC in Berea, said the family and church leaders were waiting to hear what the cause of the blaze was.

“We have very little information on what happened. The place has been cordoned off and they are at the scene, assessing the damage and trying to figure out how the fire started.”

Stadium service on Sunday
Roberts said about 23 000 of the church’s congregants, from around Durban, would gather at the Kings Park Stadium on Sunday for a service.

“We have received messages of support from all over the world, people who have been touched by the work we do and people whose lives have been changed by the church. We have had a positive response and we believe that something good will come out of this situation,” said Roberts.

Pastor John Torrens, the lead pastor of the Jesus Dome, said he was devastated.

“We thank God that no one was injured in the fire. The prayers and concerns of so many people have been a heart-warming experience amidst the tragedy,” he said in a statement.

Torrens thanked the firefighters, several of whom are church members, for putting out the fire.

He said the church was looking at erecting a tent in the parking lot until the Jesus Dome was rebuilt. The church itself was out of bounds while the fire was being investigated.

‘God gave him a vision to build an eight-sided structure’

Roberts said his father founded the church in the 1970s.

“God gave him a vision to build an eight-sided structure which would be a house of prayers for all nations. And that is how the 6 000-seater initially started.”

Roberts said his father was criticised for allowing people of all races to gather in one structure.

“Today, we have churches in Berea, Lamontville, Phoenix, Hillcrest, Bluff, and Wentworth, and it was amazing to see people from different churches, race groups and nationalities gather at the parking, singing and praying as they watched the church burning.”

The church began at the Lyric Theatre. When his father saw it was growing, he decided to build the Jesus Dome.

According to the DCC Jesus Dome website, Fred Roberts and his wife Nellie left their denomination and started their own church in 1979. After successful services, the church purchased the Playhouse, Embassy and Lyric theatres as a permanent place of worship. They called it the DCC.

“We moved from the Lyric theatre, then the Alhambra theatre, and then the Jesus Dome. My dad saw that there were many people traveling from various places and that is why he took the church to where the people were.”

The DCC building in Berea was built in 1923. “It was a theatre and that is why the audio is amazing.”

The Truth and Reconciliation Commission’s Durban hearings were held at the church’s Berea branch.