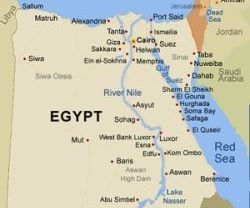 CAIRO, EGYPT — A court in Edfu sentenced the pastor of St. George’s Church to six months in prison and a fine of 300 pounds for violations pertaining to the height of his church.

Reverend Makarios Bolous is not even allowed to enter the village of Elmarinab, Edfu, in Aswan province where the church is located.

St. George’s had received a building permit from the Governor of Aswan and was still under construction when it was torched by a Muslim mob last September.

“Since then no work has been done to it,” said Rev. Salib el-Deek of the Coptic diocese of Edfu. “We are not allowed to pray there, or come near it by order of the authorities.”

According to the Umdat al-Salik, a manual of Islamic jurisprudence: “The subject peoples … may not build higher than or as high as the Muslims’ buildings…”

They are also forbidden to recite the Torah, or Evangel aloud, make a public display of their funerals and feast days and they may not build any new churches.

The church intends to appeal the ruling.