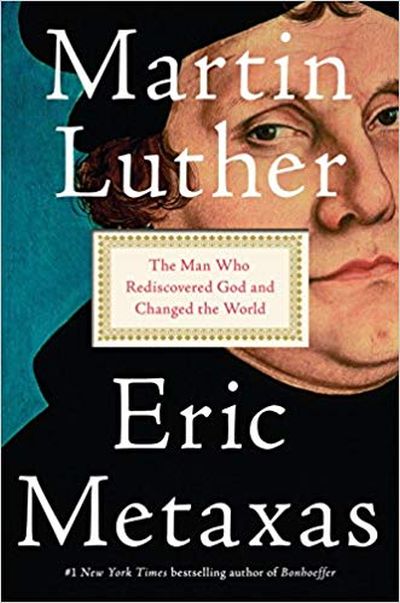 October 2017 marked the 500th anniversary of the action that is considered to have sparked the enormous religious and social changes known as the Reformation.

That a humble monk by the name of Martin Luther nailed his Ninety-five Theses to the door of Wittenburg Castle Church in October 1517, traditionally on the 31st, is well-known. This has become an iconic symbol of defiance against the Catholic Church.

This current anniversary period has seen a great deal of activity in publishing circles and a plethora of books aimed at bringing further understanding of this remarkable time in history have been produced.

In this particular biography, Eric Metaxas has sought to debunk many of the myths that have emerged over the centuries concerning Luther.

For example, he has much to say regarding the posting on the cathedral door that sheds a somewhat different light on the matter. The 95 Theses, (or criticisms) was only intended by Luther as an invitation to academic debate. In those days, church doors regularly served as notice boards. It is also likely that in fact the church custodian did the actual posting, which may well have involved paste rather than hammer and nails.

But such was the significance of the events triggered by this invitation to debate, as well as, and perhaps more importantly, by a letter Luther wrote at the time regarding the practice of indulgences, that history has assigned a great deal of drama to this supposed act of defiance.

However, at this early stage in his life, Luther was extremely respectful towards the Church and its leaders and sought only to bring to attention certain things that he felt needed to be changed for the good of the Church.

A large factor in propelling Luther’s thoughts and ideas into the public arena, and one that he originally did not anticipate, was the emergence at that time of the printing press. Since in those early days of publishing, copyright was not even a concept, Luther was originally unaware of how his thoughts and ideas could and did spread.

The printing press of course also gave people the opportunity to read the Bible for themselves. Previous to this, not many leaders in the Church even read the Bible, so interpretation had strayed very far from that of the original New Testament Church.

I thoroughly enjoyed this insightful book, which is written in an entertaining, engaging and elegant style.

I was fascinated to discover how this reformation went so far beyond the Church and to understand how very different life was when the masses were told what to think and were totally accepting of this.

Also of interest was the fact that many who originally supported Luther became much more radical and revolutionary than he was himself, and he became very critical of these former friends.

A disturbing feature of Luther’s life was a pamphlet he penned in which he vilified Jewish people, and which was later used by Hitler to justify the Holocaust. Apart from this aberration, Luther is portrayed as a man of deep godliness, integrity and courage. It remains a mystery as to why, during a certain period of his life he authored an anti-Semitic pamphlet, yet before and after this, he seems to have held a different, more compassionate view of Jews.

There is so much more I could say about what I learned regarding this formative time in Western culture and about this somewhat enigmatic man that was Martin Luther, one-time monk and later family man.

Suffice to say I considered this a very worthwhile read.