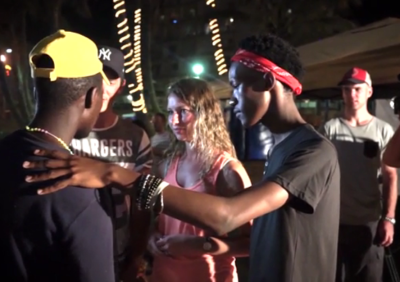 Extra Ordinary — The Film is a significant South African documentary movie that convincingly shows that ordinary people who say ‘yes’ to God can be used by Him to do extraordinary things as they reach out to people with the love and truth of Jesus.

In this movie the ordinary Christ followers who say ‘yes’ are students and young working people affilliated to a group called CORE, who reach out to people on the beach, on the street and at beachfront clubs at Margate during the New Year holiday season. While the movie has an obvious appeal for young people it has the potential to inspire people of all ages to step out and partner with God in sharing His amazing goodness with people around them.

Extra Ordinary has something of the feel of US film-maker Darren Wilson’s pioneering and now famous documentary movies that capture God in action in unexpected places. But it documents a unique South African story of a group of young people’s journey of discovery over the past 8 years of beach holiday outreach. There is something very refreshing and authentic in the way the film shows the young adults’ joy and awe as they get to participate with God in miracles of healing and deliverance that draw people to Jesus. The young people do not come across as know-it-all experts and even share feelings of self-doubt and inadequacy along the way.

Writing about the journey,  co-director of the film, Darry Reid says: “We started out completely clueless on how to go about interacting with this ‘tricky’ crowd. But over the last 8 years we have learnt much and grown in our effectiveness in reaching this generation. We started out giving free tea and coffee on our first year in Kenton; we ended this last year doing soul art, prophetic photo booths, name interpretations, treasure hunts, flash mobs, vision 2015 prophecy, words of knowledge for healing over a microphone at the beachfront. It has been a wonderful journey – the film captures our outreach from New Years 2014.”

Making the point that it’s not ability but availability that qualifies us to partner with God, Dano McCollam (US revivalist and one of the Christian leaders who make brief appearances in the film), exhorts: “Take a chance, take a risk and keep on taking those risks until you are the answer to the Lord’s prayer that His Kingdom would come and His will be done on all the Earth as it is in Heaven.”

Youth groups, fellowship groups, groups of friends, anybody who is hungry to partner with God in extraordinary ways — watch this movie. It is available via download or streaming from the website www.extraordinarythefilm.com/. You can also enter our movie give-away competition at https://gatewaynews.co.za/win-a-copy-of-extra-ordinary-the-film/.