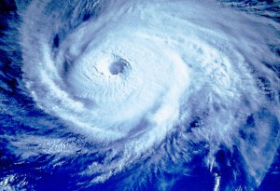 Christians and others in the Philippines—including an NGO meteorologist—have been crying out to God in prayer throughout the day as a super typhoon has made landfall and is expected to wreak great havoc.

Typhoon Yolanda, also known as Haiyan, is the strongest storm to pass through the region this year. Surging at speeds of 195 mph and gusts up to 230 mph, the typhoon has the power to cause great destruction to everything within its path: Homes, businesses and historical landmarks are all at risk. Flooding is also a significant concern.

“195-mile-per-hour winds, there aren’t too many buildings constructed that can withstand that kind of wind,” meteorologist Jeff Masters told the Associated Press on Thursday.

Residents throughout the Philippines are being urged to evacuate and seek shelter elsewhere as President Benigno Aquino advised his fellow Filipinos to make preparations for the storm.

“To our local officials, your constituents are facing a serious peril. Let us do all we can while [Yolanda] has not yet hit land,” he said in a national address. ”We can minimize the effects of this typhoon if we help each other. Let us remain calm, especially in buying our primary needs, and in moving to safer places.”

Some residents have been turning to God in prayer, asking that he protect them from the fury of Yolanda.

King Reginaldo, an ICRM Unit-FLET operation officer, who is monitoring super typhoon Yolanda from southern Luzon, has been posting prayers and information on his Facebook page throughout the day.

“Please forgive all our sins and shortcomings. We know You are a loving God. Your children here on earth, especially in the Philippines, are crying out loud to You, Lord,” he wrote in one status. “Spare us from this powerful storm. Send Your holy angels and protect us O God, or instead command them to wipe this super typhoon off the map.”

“You control the universe and everything in it. Please wipe this one out, O God,” he wrote in another post. “We ask this in the name of Your Son, Jesus Christ. Amen.”

Others have likewise posted or requested prayers online.

The vast majority of Filipinos are Roman Catholic, with an estimated 2.8 percent professing as evangelical Christians. The nation just recently celebrated the Day of the Dead, visiting the tombs of the departed and offering prayers, such as Pope Francis did in Rome. However, there are numerous Baptist, Pentecostal and non-denominational congregations throughout the nation as well.

Meterologist Michael Palmer told NBC News that the storm does cause legitimate reason for alarm, and so prayers are not unwarranted.

“It’s a very poor country and there is not really any place for these people to go because they are on an island,” he stated. “There was a similar typhoon that struck in 1990 which killed 700 people so you are going to see that here, maybe even worse.”

Last month, the Philippines were shaken by a 7.1 magnitude earthquake that left over 200 dead and over a thousand injured.

Following landfall in the Philippines, typhoon Yolanda is expected to hit Vietnam and Laos over the weekend.