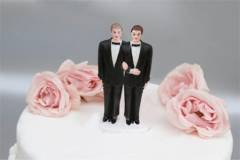 While pro-family advocates have noted the incredible rate at which the homosexualist movement has gained the political upper hand in the last five years, others are voicing concern about the shrinking “social space” in the public discourse for those who still object to “gay marriage.”

Some pundits on the left and the center-right are warning that as the homosexual movement gains legislative ground, the freedom to object is narrowing and those holding out against it are increasingly under threat. The stunning advances made by the “gay movement” some are saying, is not a triumph for social freedom, but for an increasingly brutally enforced social conformism.

Left-libertarian British journalist Brendan O’Neill warned in a column in Spiked, that in 20 years of writing on political issues, “I have never encountered an issue like gay marriage, an issue in which the space for dissent has shrunk so rapidly, and in which the consensus is not only stifling but choking.”

“The most troubling aspect of the gay-marriage movement is that, more than any social movement in living memory, more than feminism at its bra-burning peak in the 1970s, it aims not to engage in lively debate but to shut it down.”

When we operate in this high level system we will be able to fulfil our mandate to feed the hungry, care for the widows and orphans and be a blessing to all the families of the earth. The reason we are battling to fulfil this task that we have been given by God is that too many believers continue to operate in the lower level economic system of the world. “

“In truth, the extraordinary rise of gay marriage speaks, not to a new spirit of liberty or equality on a par with the civil-rights movements of the 1960s, but rather to the political and moral conformism of our age; to the weirdly judgmental non-judgmentalism of our PC times; to the way in which, in an uncritical era such as ours, ideas can become dogma with alarming ease and speed; to the difficulty of speaking one’s mind or sticking with one’s beliefs at a time when doubt and disagreement are pathologised.”

Elsewhere, O’Neill described the movement as an “iron fist in a velvet glove,” and denounced the Conservative government’s “authoritarian instinct” in forcing objectors to comply. He said it is the only issue on which, after having argued against it from a “liberal” perspective, he has received death threats.

Christopher Caldwell, a writer for the Weekly Standard, wrote for the Claremont Institute website last month, “The most troubling aspect of the gay-marriage movement is that, more than any social movement in living memory, more than feminism at its bra-burning peak in the 1970s, it aims not to engage in lively debate but to shut it down.”

Internet used to shut down debate
The internet has made it much easier to shut down this debate, Caldwell added. “Anyone who expresses the slightest misgivings about gay marriage can become the object of boycotts, blacklists, and attempts to get him fired.”

“It is certainly worth asking why, if this is a liberation movement, it should be happening now, in an age not otherwise gaining a reputation as freedom’s heyday.”

“Half the country cannot even fathom the logic of it,” Caldwell said. “Until about a decade ago, the public was nearly unanimous in considering it a joke.”

“In a decade, gay marriage has gone from joke to dogma,” and now both activists in the homosexualist movement and their supporters in governments and media consider “gay marriage” to be a fait accompli and only a matter of time before it is universal throughout the west.

O’Neill quotes polls in the U.S. that found 58 percent of Americans support “gay marriage”, compared with just 37percent a decade ago; and a British poll in which 62percent in support compared to 31percent against 10 years ago.

O’Neill adds that in that time, it has become increasingly dangerous for anyone in politics or elsewhere to object. “Opponents of gay marriage are now treated by the press in the same way queer-rights agitators were in the past: as strange, depraved creatures, whose repenting and surrender to mainstream values we await with bated breath.”

In his review of the book From the Closet to the Altar: Courts, Backlash, and the Struggle for Same-Sex Marriage, by Michael J. Klarman, Caldwell notes the effect of the media’s promotion and the changes in law have had on public opinion. He wrote, “A barrage of judicial activism on one issue can soften up voting public’s resistance on others.”

“Marriage litigation has been a bonanza,” he added. “Judicial fiat put a halo of normalcy around gay marriage where none had existed before…When elites rally unanimously to a cause, it can become a kind of common sense.” No one, he said, wants to be seen to be more conservative than his neighbours, and “the elite view thus becomes a self-fulfilling prophecy.”

O’Neill wrote that while the movement normally gets cast as a continuation of the American civil rights movement of the 1950s and ‘60s, “it’s better understood as a continuation, and intensification, of the modern state’s desire to get a foot in the door of our private lives and to assume sovereignty over our relationships.

“From the get-go, the depiction of the campaign for gay marriage as a liberty-tinged movement for greater equality was questionable to say the least,” he said.

Where “gay marriage” has been installed, it has largely been the result of the deliberate suppression of the democratic process and the work of the judiciary, the “legal elite.”

Caldwell writes, “Never since the Progressive Era has there been a social movement as elite-driven as the one for gay marriage. No issue divides the country more squarely by class. Opponents of California’s anti-marriage Proposition 8 have come to include virtually all of Hollywood, Apple, Google, Amazon, and the White House.”

O’Neill agrees, saying, “Grassroots public protesting for the right of homosexuals to marry was notable by its absence. Instead, this has been a movement led by lawyers and professional activists, backed by the CEOs of hedge-fund corporations and newspapers of record such as The Times.”

Caldwell quotes research that found public support for gay marriage has been increasing by four points a year since 2009. “Public opinion does not change this fast in free societies. Either opinion is not changing as fast as it appears to be, or society is not as free,” he concludes.