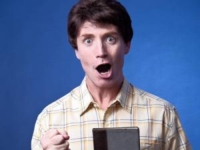 Popular comedian Aaron McIlroy (The Loser, The Golfer, father in SPUD) will be staging his one-man play The Happy Clapper in East London next week.

The show, which is aimed at both Christians and the unchurched, aims, through a combination of humour and “theologically bullet- proof” content, to explain what Christians believe and why.

The Happy Clapper had successful runs in Durban in November 2010 and March this year. McIlroy hopes to take the show to Port Alfred soon and back to East London in December.

According to publicist Lu Harman, McIlroy and director Patrick Kenny spent nearly three years deliberating over how they could bring the Christian message from the pulpit to the stage. The result was the Happy Clapper which they wrote together.

Part of McIlroy’s motivation for tackling the project was to counter perceptions of Christianity that had been skewed by media, film and television.

The Happy Clapper will be performing at the Guild Theatre in East London on Monday (November 28)and Tuesday at the 29th of November.  Tickets are R95 and block bookings of 20 and over will be discounted to R80 per ticket. Bookings can be placed through The Guild Theatre Box Office on 043 743 0705.