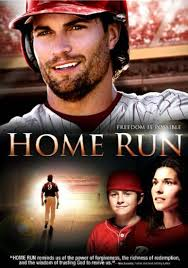 Home Run is a well-made family drama about a pro baseball star, Cory Brand (Scott Elrod) whose drinking problem has started to control his life. He shows little remorse or concern when his team management suspends him after an ill-disciplined outburst during a big match. Shielded by his sporting talent, his celebrity, his money, his charm and his rascally, quick-witted agent (Vivica A Fox), who is always there to sell the media a positive spin on his mindemeanours, he clearly believes he can get away with anything. But he is a bit disgruntled when the management send him on a PR damage-control mission to his childhood hometown.The return to the small town stirs up emotions that go back to the abuse he experienced from his alcoholic father who himself was abused by his alcoholic father. Cory’s compulsive drinking immediately lands him in more serious trouble in his hometown. His agent is once again at hand to save his reputation but to his dismay he has to stay and coach a little league team. What is more his bosses insist that he joins a 12-step programme to get help with his drinking and the only programme in town is a Christian one. There are also a number of relationship challenges for Cory in the town, including his younger brother who is a district attorney and lives in the old family home, his brother’s wife who makes little effort to hide her disapproval of him, and a young mother and widow, Emma (Dorian Brown) with whom he has a past.

Cory tries to play for time and make light of his troubles, confident that before long he will be back in the big city, hitting balls out of the park in front of his fans. But the isolation, encounters with significant people from his past, and the 12-step programme where he sees people testify how Jesus helped them to beat various addictions, do unsettle him. In the process he is forced to question his immature behaviour and victim mentality. And he gets to understand another side of people he thought had it easy. He gains new perspectives on the challenge of parenting. He gets close to children in the little league side. He learns that his team management do not see his as indispensable. And ultimately he gains insight into his inability to control the alcohol addiction that is destroying him. He has to make some life-changing decisions.

The actors are all well-cast and the acting is good. Cory and Emma respectively stand out especially for their credible portrayals of the unraveling drunk and the responsible young woman who doesn’t know whether to despise or love the young man who has returned from the past. Some of Cory’s facial expressions are priceless, during the phase of the 12-step programme when he thinks he is in the wrong place surrounded by a bunch of losers. The movie succeeds in showing that Christ offers the hope of restoration to people trapped in addictions.