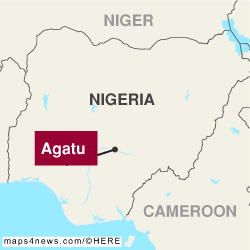 The armed attacks in and around Agatu, in the central Nigerian state of Benue, had features long familiar to Nigerians: ethnic Fulani cattle herders, largely Muslim, moving in on farmers, largely Christian. The long-running land conflict frequently is framed in economic terms, but it also has distinctive religious contours. Survivors quoted by Christian-rights advocates said the attackers specifically targeted Christians and churches and spared Muslims and mosques.

Massacre
The violence broke out on February 23 and continued across several villages for several days, culminating on February 29 in what witnesses told Nigerian news media was a massacre in Agatu. The killings sparked protests in Nigeria’s capital, Abuja. A week after the attacks began, President Muhammadu Buhari ordered an investigation.

A complete assessment of the number of dead and displaced is not available. Early social-media postings by Signal, a news startup in Abuja, reported “scores” dead. An aide to Benue Gov. Samuel Ortom told Agence France-Presse that “hundreds of lives were lost.”

The Agatu violence appeared to be worse than the 2010 attacks in Plateau state that killed more than 200 Christians, according to a 2 March email sent to supporters by Emmanuel Ogebe, a Nigerian human-rights lawyer based in Washington, DC who specialises in crimes against Nigeria’s Christians.

A Nigerian news organisation, Vanguard, quoted a survivor, Ada Ojechi, as saying the fatality rate was very high but could not put a figure to it because no survivor could take the risk of counting the dead.

Ojechi told Vanguard that the promise of Federal military and Benue state police created a false sense of security. Many of the people who fled began to return on Sunday. The next day, the attackers returned.

“Our people were caught napping because we relaxed when we heard what we considered the cheering news that the federal government has intervened,” Ojechi was quoted as saying.

“Unfortunately, the Fulanis knew we had relaxed and took advantage of us to unleash a terrible massacre on us. As we speak, corpses litter everywhere in the village. I have been trying to reach many of my family members without success. We feel terribly let down by the government that announced a joint security team. We have not seen the security men- be they policemen or military, as I speak.”

Nigerian news reports said more than 7 000 people have been internally displaced and are living in camps as a result of the violence.

In announcing an investigation, President Buhari said: “The only way to bring an end to the violence once and for all is to look beyond one incident and ascertain exactly what factors are behind the conflicts.”

“There should not be any reason why Nigerians of any group or tongue cannot now reside with one another wherever they find themselves after decades of living together.”

In his March 2 email dispatch from Nigeria, Ogebe said the area remained in an “active shooter” situation.

Spared when recited verse from Quran
In meeting with eight survivors on February 28, Ogebe said a Muslim man claimed to have been spared when he was able to recite a verse from the Quran for the attackers.

“They claimed they were told that [the Muslim man’s] people did not support Islamic worship. He denied this and showed them his mosque. It was spared but village churches were burnt,” Ogebe wrote.

“Yet the US embassy still maintains that this is purely a turf war between farmers and grazers without religious undertones.”

Open Doors, a global charity that provides support to Christians and churches that are under pressure for their faith, ranks Nigeria as the most violent country on Earth for Christians. Boko Haram, the Nigerian Islamist insurgency that has pledged allegiance to the self-proclaimed Islamic State, is responsible for the great majority of anti-Christian violence. But its attacks “also inspire others, thus creating a ripple effect leading to further fanatical movements and violent, more spontaneous mobs,” according to an Open Doors assessment of Nigeria.

“Hausa-Fulani herdsmen and settlers have been conducting massive operations over the years as a result of which thousands of Christians have been evicted or killed,” the Open Doors assessment says.

Nigeria ranks No. 12 on the Open Doors World Watch List, which comprises the 50 countries where life as a Christian is most difficult.