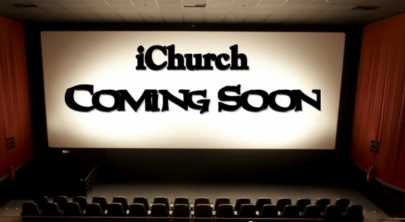 A vision of a church that has been burning in the hearts of a group of Christians in Port Elizabeth for the past two years is coming to a beachfront cinema soon.

iChurch will launch at the Nu Metro cinema at the Boardwalk at 9am on Sunday, August 5.

It is not an attempt to replace traditional church, but it is part of a move to take church outside of four walls and to make it accessible to an unchurched cyberspace generation that is most comfortable with socialising and accessing information via screens, said Jerome Liberty, a member of the team of about 16 people who have pioneered the iChurch development. Most of the team members are young people (the new millennimum generation) who have no previous video production experience.

iChurch is about departing from the conventional and “putting new wine in a new wineskin”, says the team in a document entitled ‘What is iChurch?’. It says iChurch is a relevant response to the Great Commission, preaching the Gospel in the language of new millennium media. iChurch is a relevant worship experience like no other …..using visuals and graphics and new millennium technology to communicate a timeless message of God’s unconditional love. The power of the message of his righteousness breaking out of the limitation of having church with four walls and two doors and two windows.

I attended one of a series of weekly “sneak previews” of iChurch at which an audience of Christians experiences big-screen church, and provides constructive feedback ahead of the launch. The presentation includes high-impact worship music videos which are sub-titled so that the viewers can participate, and a preach that is recorded in a studio. iChurch team members will encourage viewers to join small groups which may lead them into more traditional church life.

The iChurch team plans to blitz the beachfront with a high visibility, youth-oriented, marketing drive in the week before the launch. One of the groups that the iChurch team hope to reach are children who spend all day in the Boardwalk entertainment complex on Sundays while their parents gamble in the casino. “The parents leave their children with enough money to watch all the shows and we have heard that some of them have seen the movies five or six times. Imagine if we can get into this domain,” said Liberty.

Initially iChurch has signed a lease for one of the three 180-seater Nu Metro cinemas at the Boardwalk. The team is open to running with iChurch as God leads. Who knows, a time could come when iChurch will be showing at a cinema near you, wherever you are in South Africa.