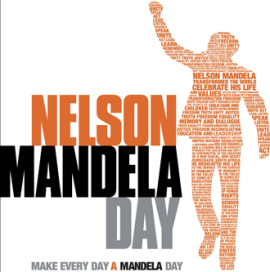 I approached a few people who work in the church offices with me and asked them what they were doing for Mandela Day 2013? I was surprised at the amount of push-back, disinterest and disappointment they had in association with Mandela Day.

After digging a little deeper, I came up with some interesting reasons why and at the same time this brings me to ask a few questions about this day.

From an NPO (Non Profit Organisation and specifically a set of pre schools) perspective, their experience has been one of disappointment and disbelief at the way some people behave at this time of the year. At the time of my question it was 2 days to go, and they were getting some frantic phone calls with people saying they would like to come and spend their 67 minutes with the children. This is not new to them, but because they have young children who they are trying to teach and they have child protection policies in place, they cannot always accommodate these requests. This results in grumpy and angry responses.

People seem to want it done on their terms and in their time frame, whether it be to give time or a donation. Is this really the spirit of Mandela Day – to tick the box, post the picture and feel you have done your part?

One pastor gave an interesting perspective saying that maybe people should spend the day in jail, and that he would rather do things to help other people on any day other than Mandela Day.

Others suggested that they will do what they do every year as it is convenient and on their terms. Somehow, I think this has become more the norm. This is not out of a bad attitude or not wanting to help, but because it is frustrating trying to find something to be involved in on a normal working day, and if you are a mom, then you have children doing homework and extra murals as well. I think as Christians we know the current norm is tokenism, but because of the man and the excitement around the day, we do want to be a part of it. I love thinking of something that I can involve my children in, but I still feel we need to catch the greater picture of how to assist those around us on an ongoing basis, and not just for 67 minutes once a year.

As far as the church as a whole, there was nothing corporately organised, as has been the case in the past. The plan has been to encourage members of the church to meet on a monthly basis with a local NPO.

On asking a few other people within the last few days, these were the answers: “I donʼt know, can you give me some ideas and we will just do what we did last year.” Some ideas I picked up from the Internet about things happening around Johannesburg were: selling cakes for The Teddy Bear clinic, donating R67 to Cotlands, collecting clothes for The Family Africa, bringing clothes and tea time treats for Kids Haven and at the same time to sign up to become a big brother or sister for a child. In Durban, LIV villages are making sandwiches for a local school as their way of giving back because of all the support they receive.(I really believe it is a valuable thing for those who always receive to give back in some form.) I posted on my Facebook page to ask people what they were up to – one person responded with what they were doing. I have hardly seen any information from people as to what they are doing.

So something is up, but what do we do about it?

Christian perspective
People seem tired of the same old, same old every year. They feel the pressure of the media and those around them to do something and deep down I think everyone enjoys helping others, but is there real value and purpose in helping out for 67 minutes once a year? I think if we look at this from a Christian perspective, itʼs laughable, and if we believe that Godʼs word is living and real, then maybe we have the answer that people are looking for in order to put meaning and value back into helping others. I love Nelson Mandela and all that he has come to stand for in this country (in fact, after writing this article, I am even more interested in reading some of his books that my Dad collected over the years). But who are we ultimately serving? And if it is someone who is about to become a dead person, then our focus is in the wrong place and this will cause frustration. We are called as Christians to do good works as a result of our faith, and not for 67 minutes a year. The organisation ʻShoutʼ have the right idea too – ʻMake every day a Mandela Day.ʼ Reaching out and doing good should be something we do everyday, without having an event to make it happen.

What if we had to approach an organisation and ask what their needs are and how we can help, instead of demanding that they accommodate us and our needs?

What if we had to commit to a once a week slot of time to a nearby school that needs such assistance, or a once a month monetary donation for needs that a local NPO has?

What if we had to find an organisation involved in mentoring young people, and offer our time to this – realising that this would be a regular, consistent commitment from us?

In regards to food donations, we need to find a way to assist families on a weekly basis, as monthly parcels are often way too little. And yearly…well, we know that canʼt work.

I am not by any means saying that we do away with Mandela Day and all that it is associated with, but we need a change of heart and mindset to make this work to effect change in our world because we cannot get rid of poverty and hunger by donating R67 once a year, or by giving food to a hungry person once a year.