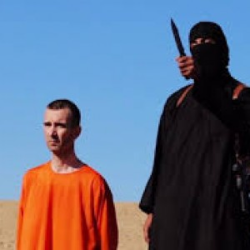 The Muslim terrorist group ISIS, or the Islamic State of Iraq and Syria, has released a third beheading video, this time executing a British aid worker who had been providing humanitarian assistance in Syria.

The video, which was labeled “a message to the allies of America,” begins with footage of UK Prime Minister David Cameron condemning ISIS, and then shows aid worker David Haines handcuffed and on his knees.

“My name is David Cawthorne Haines. I would like to declare that I hold you, David Cameron, entirely responsible for my execution,” Haines says, reading a message that many believe was crafted by his captors.

“You entered voluntarily into a coalition with the United States against the Islamic State just as your predecessor Tony Blair did following a trend amongst our British Prime Minsters who can’t find the courage to say no to the Americans,” he continues. “Unfortunately, it is we the British public who will pay the price for our parliament’s selfish decisions.”

Haines’ executor, who is believed to be the same masked ISIS fighter that appeared in previous videos—and who speaks with a British accent—then threatens Cameron for his active opposition to the terrorist organization.

“This British man has to the pay the price for your promise, Cameron, to arm the Peshmerga against the Islamic State,” he said. “Ironically, he has spent a decade of his life serving under the same Royal Air Force that is responsible for delivering those arms.”

“Your evil alliance with America, which continues to strike the Muslims of Iraq and most recently bombed the haditha dam, will only accelerate your destruction, and playing the role of the obedient lapdog, Cameron, will only drag you and your people into another bloody and un-winnable war,” the Muslim man continues.

He threatens Cameron and all those who join the United States against the Islamic organization.

“If you, Cameron, persist in fighting the Islamic State then you like your master Obama, will have the blood of your people on your hands,” the executioner stated. “We take this opportunity to warn those governments who’ve entered this evil alliance of America against the Islamic State to back off and leave our people alone.”

The footage then shows Haines, 44, lying on the ground beheaded.

Both Cameron and U.S. President Barack Obama released statements Saturday night condemning the beheading of the aid worker, who had been missing from Syria since last year.

“This is a despicable and appalling murder of an innocent aid worker. It is an act of pure evil,” Cameron said. “We will do everything in our power to hunt down these murderers and ensure they face justice, however long it takes.”

“The United States stands shoulder to shoulder tonight with our close friend and ally in grief and resolve,” Obama stated. “We will work with the United Kingdom and a broad coalition of nations from the region and around the world to bring the perpetrators of this outrageous act to justice, and to degrade and destroy this threat to the people of our countries, the region and the world.”

ISIS has now threatened to behead British citizen Alan Henning in an attempt to push back military operations against the terrorist organization.