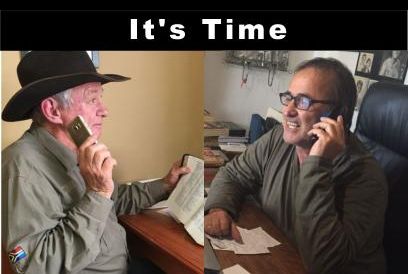 Alf James, right above, interviewing Angus Buchan, left above,  just over a fortnight ahead of the “It’s Time” national day of prayer at Bloemfontein where preparations are being made to cater for a million people praying together in one place.

It’s time to stop pointing fingers, being disparaging, insulting or judgmental. It’s time to acknowledge that we are all to blame for the state of the nation in some or other way, and it’s time to embrace one another in Christ, according to Angus Buchan.

He has urged all South Africans to attend the “It’s Time” national day of prayer gathering on a farm 4km outside of Bloemfontein on April 22.

“It’s time to suit our actions to God’s Word. We declare war on the disregard for human life and unkindness. On April 22, we will be drawing a line in the sand,” affirms the farmer-evangelist.

Day of prayer for all South Africans
He says the day of prayer is intended for South Africans of all genders, races and denominations who are concerned about malice, hatred, violence, murder and corruption in the country.

“Shall a nation be born at once?” asks Uncle Angus referring to Isaiah 66:8.

“Can a nation be changed in a day?

“Of course it can, the answer is a definite yes!

“It can be changed when we submit as a nation in one place at one time in prayer to the living God, because the Lord has His hand on this nation.

“He wants this nation to succeed, but an eye for an eye and a tooth for a tooth will not help at all.

“So, we are going to Bloemfontein, you and I, to seek the face of God and to ask the Lord Jesus Christ to intervene on our behalf, because outside of that this country has no hope,” he says.

“It’s Time” comes at a moment of great division, uncertainty, confusion, and negativity in all sectors of South African society.

“I am telling people they cannot afford, but to be there. They have to be there, there is no other hope besides a move of God.” — Angus Buchan

“We have a visionless, leaderless, hopeless situation that is spreading through the nation. However, we must take courage and be inspired by Esther 4:14 Yet who knows whether you have come to the kingdom for such a time as this,” reassures Uncle Angus.

The planting of the “It’s Time” seed
He says the seed for the “It’s Time” prayer gathering was planted when a Whatsapp video did the rounds with a desperate outcry for Buchan or any other spiritual leader in South Africa to call for a prayer intervention and arrange such an event.

When Uncle Angus replied by posting a video on social media, he received 1.8 million responses within hours and after his first video was posted, more than 18 million people responded within two weeks.

“I was sitting in my quiet-time room minding my own business on that eventful morning, only about six weeks ago, when the Lord invaded the room like a tsunami and changed all my plans,” explains Uncle Angus laughing.

“All my preaching plans had been arranged until December, but that is how the Lord works.

“The call to prayer on April 22nd is a move of God, it is not a man’s idea or a good idea, God has invaded us, not just me, but the nation.

“Normally it takes about a year to organise and arrange an event such as this, but this has happened in six weeks.

“It has been miraculous and it seems our need to unite and humble ourselves before the Lord in prayer has been magnified in recent weeks.

“Anybody that was undecided a week ago is no longer in two minds, but is certain.

“God is calling His people back He is making it crystal clear.

“Our country is totally split at the moment right from the top to the bottom and I want to say that we need to put our petty differences aside and come together as the children of God in agreement, asking Him to intervene on our behalf.” — Angus Buchan

“I am telling people they cannot afford, but to be there. They have to be there, there is no other hope besides a move of God.

“Just the other day the Lord impressed on me that we have to be Jesus and express His love gentleness, kindness, and forgiveness.

“We have to express meekness, which is controlled strength. We have to be different to the world.

“On April 22nd we will be praying positively rather than in rebuke or blame.

“We will not just be addressing prayer from a national standpoint, but we will be praying individually for people with problems with addiction, for people who have been through abortion, broken marriages, people that are sick, and people that are demonised.

“We are meeting on a farm called Wilde Als, which means wild aloe, that has a lot of medicinal values and God has shown me that people will be healed on that day without anybody anointing them or laying hands on them, because His presence is going to be so strong.

“His Word tells us to cast our cares upon Him, for He cares for us.

“I really believe that on that day people are going to be set free, healed physically, spiritually and mentally.

“We are calling on the living God to intervene on our behalf and He is more than willing, he is just waiting for His people to come together before Him.” — Angus Buchan

Promoting unity
Uncle Angus is convinced that so many people coming together in agreement will promote unity in the country.

“Our country is totally split at the moment right from the top to the bottom and I want to say that we need to put our petty differences aside and come together as the children of God in agreement, asking Him to intervene on our behalf.

Uncle Angus says although it is a season of uncertainty in South Africa, it is vital that children of God walk as light in the dark and shine for Christ.

“We must be different from the world; we must be distinct from those around us by reflecting Christ.

“They say it takes a dead fish to flow with the current, but we must be alive in Christ, we must reflect God’s ways.

“We need to spend time with the Lord, repent and make sure there is nothing in our own lives that will inhibit the moving of the Holy Spirit, because the Holy Spirit is going to move through people.

“It is going to be an orderly meeting, but we are going to give the Holy Spirit as much time as He needs to minister to us as a nation.

“When men pray God works and we will see the biggest move of God this nation has seen.

“This is not a case of, if we feel like it, this is a case of, if you are getting married on that day postpone your wedding, cancel that fishing or hunting trip.” — Angus Buchan

“I am anticipating what God is going to do on April 22 with great excitement.”

“We have to be ready, by humbling ourselves before the Lord and contemplating what God has done for us in Christ.

“Easter falls before the ‘It’s Time’ gathering, which is perfect, we can spend time appreciating that where there is no crucifixion, there is no resurrection.

“We need to keep our eyes fixed on the author and finisher of our faith.

“I would really encourage South Africans to prepare themselves for the greatest miracle they will ever see in their entire lives.

“We are calling on the living God to intervene on our behalf and He is more than willing, He is just waiting for His people to come together before Him.

“This is not a case of, if we feel like it, this is a case of, if you are getting married on that day postpone your wedding, cancel that fishing or hunting trip.

“A lady phoned the other day and told us that she is bringing her daughter back from New Zealand, just for this prayer meeting, busses are coming from Namibia.”

Meanwhile, preparations on the farm outside Bloemfontein to accommodate a million people are under way.

All indications are that “It’s Time” will be the largest day of prayer in the history of South Africa.

“April 22nd will be a day much talked about by generations to come. Be part of the future and come and join us in prayer,” he urges.