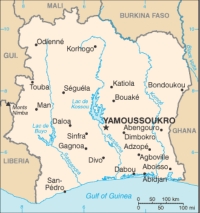 The crowd suddenly surged around a young man, crying out for blood at a crowded bus station in Ivory Coast’s main city. Witnesses say at least 20 people hit him first with their fists and then with chunks of concrete, until he lay unconscious. Tires were then piled on top of his bloodied body, and he was drenched in gasoline and set alight.

Human Rights Watch, in its Thursday report, also cited executions in detention by the new country’s new security forces, a loosely organized group of rebels who brought President Alassane Ouattara to power in April with the help of French and U.N. forces. Former president Laurent Gbagbo had refused to step down after losing an election months earlier.

Yopougon, the Abidjan district where fighters loyal to Gbagbo held out for weeks after his arrest, is a microcosm of the divide still seen in this West African nation.

In pro-Ouattara areas, marketplaces are bustling and people wear T-shirts with the new president’s face on them. In pro-Gbagbo areas, streets are abandoned after inhabitants fled, fearing retribution. Ouattara’s army, called the Republican Forces, patrols in heavily armed convoys.

The New York-based rights group says in its report that these soldiers have been arbitrarily arresting young men in Yopougon, beating, torturing and executing at least 149 of them on the sole basis of their ethnicity, perceived as proving that they supported Gbagbo.

“Most killings were point-blank executions of youth from ethnic groups generally aligned with Gbagbo, in what appeared to be collective punishment for these groups’ participation in Gbagbo’s militias,” Human Rights Watch said in a statement.

Niangon, a part of Yopougon held by hundreds of pro-Gbagbo militiamen for weeks, is now a ghost town. The remnants of road blocks have been pushed aside to let the patrols through. Block after block of closed storefronts are riddled by bullets; few pedestrians can be seen.

When asked where everyone is, a young man who refused to give his name responded, “they’re all gone. They’re not coming back.”

Only blocks away, crowds formed lines at the Siporex bus station, where last week’s lynching occurred.

Witnesses said the incident started when a baggage handler identified a man waiting to buy a ticket as a pro-Gbagbo militiaman. The crowd took less than 20 minutes to kill him. By the time Republican Forces arrived, his body was already in flames.

“Before, everyone here was pro-Gbagbo, but they’ve all fled,” said Jean-Michel Tahoue, a security guard at the trashed and looted Texaco station across from the lynching site. “This guy was taking a giant risk coming out in public when everyone saw him carrying an (AK-47 rifle) and fighting for Gbagbo only a few weeks ago.”

At a police station only a few blocks away, station chief Lieutenant Seydou Traore said 20 people were arrested and interrogated, but were all released the next day.

Human Rights Watch said at least 54 executions took place here and at one other police station in Yopougon. Investigators even saw the body of a detainee burning just outside in mid-May.

Across Yopougon, a half-constructed military base has been taken over by a ragtag group of Republican Forces _ teenage recruits and seasoned war veterans who wear the mixed-and-matched uniforms of Gbagbo’s former army.

“Yopougon was the last combat zone,” said Maj. Antony Cisse. “The problems here are far worse than elsewhere. We’re still trying to identify our own forces and hand out ID badges. But there are many criminals who can easily procure a camouflage uniform and a rifle and do anything they want in our name.”

Members of Ouattara’s government couldn’t be reached for immediate comment on Thursday.

Prior to Gbagbo’s arrest, Yopougon was firmly under the control of a militia fighting in his name. Dozens of cases of lynchings of people of ethnicities perceived to be pro-Ouattara were reported. In some cases, videos of people being burned alive were posted on the internet. In the days following Gbagbo’s capture, the militias went on a rampage, burning, looting and killing.

They were run out of Yopougon in early May by a group of Republican Forces under the command of Cherif Ousmane, the commander named by Human Rights Watch as personally overseeing the massacre of 29 detainees.

Ouattara has said everyone responsible for human rights abuses will be brought to justice, even those who fight on his side.

Other rights groups and the U.N. have said both sides carried out massacres during the five-month political standoff sparked by Gbagbo’s refusal to cede power after losing November’s election.

Gbagbo and his entourage are being kept in a Ouattara stronghold in the country’s north and proceedings have begun against them. So far, no Republican Forces commanders have been arrested.