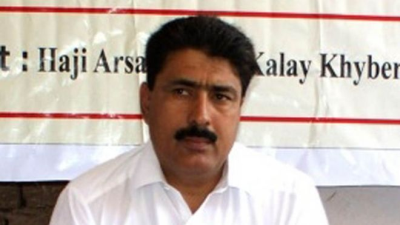 The jailed doctor who helped the U.S. pinpoint Usama bin Laden’s Pakistan hideout, finally got to see his wife and children on Wednesday in the Peshawar prison where he has been held for more than two years, FoxNews.com has learned.
Shakil Khan Afridi had not seen his family since being whisked away by Pakistan security services three weeks after the Navy Seal Team raid in May 2011 that killed bin Laden. Even his meeting privileges with his lawyers and brother were revoked after he spoke exclusively with FoxNews.com last year in an interview in which he detailed conditions of his imprisonment and pledged his affection for America.

Afridi is serving a 33-year jail sentence after being convicted of colluding with terrorists, though it generally is accepted he is being punished for aiding the CIA. As part of the effort to positively identify the terror mastermind, Afridi set up a Hepatitis B vaccination program to collect DNA samples to try and verify bin Laden and his family were at a compound in Abbottabad, 80 miles from the Pakistani capital Islamabad. He was able to provide crucial information which enabled the U.S. to proceed forward with the daring raid.

Sources told FoxNews.com Afridi’s family was escorted Wednesday under tight security to Peshawar Central Jail, a prison well known for holding some of the most notorious and dangerous prisoners in the region.
His wife, Imrana Ghafur, and their three children, whose ages range from 10 to 15, met with Afridi for up to 10 minutes under supervision of intelligence officers. But Afridi’s legal team apparently did not know about the meeting.
“We are not aware they met and how did authorities get in touch with them (family) without notifying us?” asked one of Afridi’s lawyers.

Last month, Pakistani authorities lifted a nearly 10-month ban on meetings with Afridi. But when his elder brother Jamil visited the prison, officials didn’t allow him to meet Afridi. Jamil Afridi said he was told only Afridi’s wife and children were on a list of those permitted to visit by the government office overseeing Afridi’s case.
Sources told FoxNews.com other privileges have been reinstated for Afridi, including the ability to receive food and clothes from family members.

Jamil Afridi hopes to be permitted to meet his brother soon, but will likely have to sign an agreement barring him from discussing the meetings with media.

“It’s a matter of a few days and the brother will be allowed,” said the lawyer, who is preparing for Afridi’s next court hearing on July 18. Several previous hearings have been postponed or adjourned, but the lawyers are optimistic the judge will hear the case this time.

“I think things are changing and moving rapidly,” said the lawyer. “I feel that something good will happen soon and freedom (for Afridi) will be achieved.”